In copyright law, the big news is always made by cases such as the Jammie Thomas verdict, the Tenenbaum trial or even The Pirate Bay trial in Sweden. As importance as these cases are, their legal applicability to the average person is dubious, especially since the RIAA has stopped suing file sharers.

For the cases that could have a direct impact on your life, you often have to dig deeper. This is true for the case of Brayton Purcell LLP v. Recordon & Recordon, a seemingly dull case about two law firms in a dispute over content posted on their respective Web sites.

However a recent decision by the 9th Circuit Court of Appeals in the case, if upheld by other circuits or the Supreme Court, could have a drastic impact on the way copyright issues are litigated in the United States.

How big is the difference? The dissenting judge on the panel said the following, “Under the majority’s opinion, every website operator faces the potential that he will be hailed into far-away courts based upon allegations of intellectual property infringement, if he happens to know where the alleged owner of the property rights resides.”

In short, if you are accused of copyright infringement, it is no longer safe to assume that you would be sued in your own district, but rather that you could be forced to litigate in the plaintiff’s court, enduring the extra costs and expense that comes with it. END_OF_DOCUMENT_TOKEN_TO_BE_REPLACED

It seems that the rest of the world is waking up to the fact that stolen content is big business. Within the past two years, there are a variety of services you can use to track where your online content has gone, report and stop it. A new project is underway called the Fair Syndication Consortium that might put a dollar amount on that stolen content, paying you for others abusing your content. END_OF_DOCUMENT_TOKEN_TO_BE_REPLACED

Story Updated 04/08/09 (see end) Jon Engle is a graphic designer from New Mexico. He has done work for many TV shows and TV networks as well as countless Web sites.

However, a recent series of events has put Engle’s reputation at risk. According to a post in Engle’s blog, a stock art site has accused him of copyright infringement. They have presented him with an $18,000 bill, threatened him with a lawsuit and even contacted his previous clients, claiming that he was under investigation for infringement and that the work he did for them “may have been stolen from their client.”

The problem, according to Engle, is that he created the works himself and that he believes someone uploaded them to the stock photography site without his permission, and in violation of that site’s terms of service. But the company, feeling that the uploads were legitimate, are aggressively protecting what they see as their intellectual property, using their copyright attorney.

However, it doesn’t matter who is in the right in this case. For either side to clear their name, they are going to have to prove that the work is theirs. Unfortunately, as Engle admits, this will not be a simple matter as he “would never have thought to plan for something like this”. Though he has some incidental proof, namely upload dates to LogoPond and metadata in the files themselves, these are hardly ideal since Engle is not completely sure when the images were lifted.

Engle’s story highlights the need for writers, artists, photographers and other creators to be aware that there are a million ways their work could come into dispute and to prepare for such a situation in advance. The end goal is be in a situation where, no matter what happens to your work, you always have proof that you created it first. END_OF_DOCUMENT_TOKEN_TO_BE_REPLACED 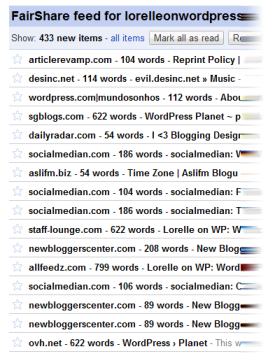 In honor of my declaring war on content theft with the “Year of Original Content,” FairShare is offering a limited number of free registrations for Blog Herald readers to try their copyright infringement tracking system currently in private beta testing.

FairShare, unlike Attributor’s current business service, is targeted at bloggers and Webmasters who want to track how their content is being used and where, but do not require advanced tools and filtering. It works with Creative Commons licenses and tracks where content reappears, how much is used, if the content is linked and if the site displays any advertisements.

Though the service carries with it many different limitations, for bloggers that can not afford or don’t have the time to use a more advanced system, it is likely a very good choice.

FairShare creates a feed based upon your blog’s URL that is matched against the sites that FairShare monitors and tracks across the web, comparing the content against the original by checking the number of words copied, whether or not the matching site links back, if there are ads on the site, and other copyright violations in accordance with your selected Creative Commons license. FairShare supports all six v3.0 Creative Commons licenses. END_OF_DOCUMENT_TOKEN_TO_BE_REPLACED

Back in November, Attributor released a study that many Webmasters and content providers intrigued. According the report, for many Websites, most of the viewings of their content do not happen on their page or their RSS feed, but on other sites.

Earlier this month, the same company announced the public beta of its new product, FairShare, a free service designed to help help bloggers track their’s content’s usage, check for license compliance and understand who is using their works and how.

Though the service has some limitations, it can be a valuable tool for bloggers to get a glimpse at how their content is used on the Web and where some of their untracked readers may be hiding. END_OF_DOCUMENT_TOKEN_TO_BE_REPLACED