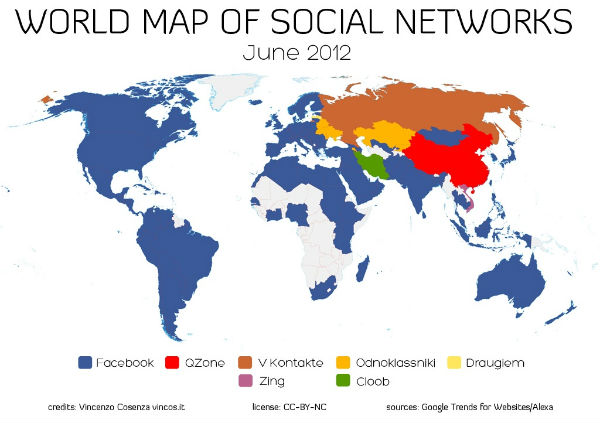 Facebook has continued to spread its presence around the globe. Several years ago companies such as Orkut and Bebo managed to control areas outside of the United States but now the world’s largest social network is getting bigger and drowning out those services.

For example South American users have almost completely abandoned other social networks for the Facebook platform, while much of Europe and Africa have made the move away from V Kontakte, QZone and other formerly popular social networking platforms.

Facebook’s increased dominance was tracked by social media strategist Vincenzo Cosenza. The social media guru uses Alexa, Google Trends and other tracking methods to create a map which displays the dominance of certain social networks in different parts of the world.

Cosenza’s study found that Facebook dominates the market is 126 out of 137 countries, including Australia, Japan, the U.K., Canada, Brazil, India and of course the United States.  END_OF_DOCUMENT_TOKEN_TO_BE_REPLACED