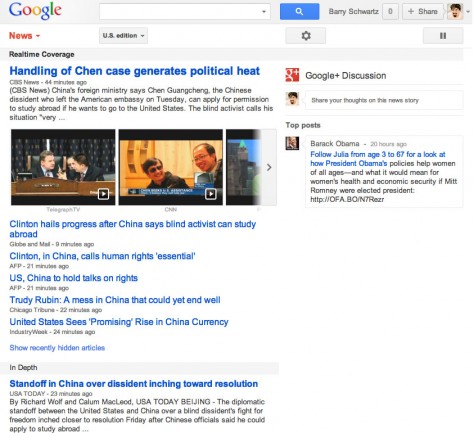 Google News on Friday added some new upgrades to its platform including larger thumbnail photos that dynamically expand when stories are selected and the ability to more robustly share information via Google+.

Speaking about the company’s new Google+ integration a representative for Google wrote in a blog post:

“Many news stories inspire vibrant discussions on Google+, and today we’re starting to add this content to both the News homepage, and the realtime coverage pages.”

If you want to see just headlines the feature can be turned off, otherwise you will see news from your circles, journalists and other “notable” writers right on the Google News homepage.  END_OF_DOCUMENT_TOKEN_TO_BE_REPLACED

Color me confused, but it looks like Google is attempting on making Google News more social by showing your tweet friends what stories they share from the service.

While Twitter’s addition is not surprising, Google Buzz’s absence is.

Friends is an experimental section in the side column that helps you find news articles that your friends are sharing on Twitter.

Sometime recently I gave up. After making RSS reading part of my nearly-daily routine for the past four years, I stopped logging in.

I’m not sure exactly when it happened. I had noticed getting through my Google Reader was taking longer and longer, becoming a serious time sink, and I even converted to using Fever to lessen the time needed to go through my feeds, but it wasn’t enough.

I started skipping days regularly and it eventually got to where there was often over a week of backlog waiting for me. Then, I just stopped going. Though Fever and Google Reader are both great apps, I just stopped.

I haven’t logged into an RSS reader for several weeks now and I don’t feel as if I’ve missed anything. I’ve used a hodgepodge of Twitter, Google News and following a few select sites closely to keep on top of everything and, for the most part, it has worked well.

However, I may not be rid of RSS for good, I may be coming back. But if I do it will be for a very different reason and with a very different approach in mind. END_OF_DOCUMENT_TOKEN_TO_BE_REPLACED

Well, why not I guess. Although I wouldn’t recommend the average blogger to jump at the opportunity to add a Google News box, displaying the latest news from a set category, or even various keywords. It might come in handy for niche blogs, product focused blogs, or completely different ones. END_OF_DOCUMENT_TOKEN_TO_BE_REPLACED