With Movable Type fading away into obscurity (unless you live in Japan), it looks like Melody (which is a fork of Movable Type 4.34) is entering its last round of beta in anticipation for its first release candidate debut.

So it is with great pleasure that we announce the release of Melody 1.0 Beta 3, the last beta before we release RC1 next week, and hopefully 1.0 shortly thereafter. So to all Melody beta testers: time to fire up your test instances and take one last opportunity to bang on Melody before it finally ships. And to the rest of the Melody and Movable Type community – get ready, 1.0 is right around the corner! (Official Melody Blog)

Despite my heavy affection for WordPress, I’ve been rather impressed with Melody overall (especially their user interface) as well as how they plan on making Melody designer friendly via YAML (which is suppose to be much easier to use than HTML).

It will be interesting to see if Melody can prove itself as a superior alternative for dissatisfied Movable Type users instead of WordPress (which seems to be the first choice among defectors), although from what I’ve seen thus far from the team, Melody may prove to be a blog/CMS hit a few years from now.

Users curious about the blog software can either download Melody (note: link will trigger an automatic download) or test it out for free via Open Melody Demo.

The creators of Melody (which is a fork of Movable Type 4.34) have been busy over the past few months squashing bugs and improving the user interface in preparation for the 1.0 launch.

While the core developers are planning on rolling out a finalized version of their platform in the near future, it looks the platform will be re-entering another beta round which might push the final release towards 2011.

After a short delay, we are happy to announce that Melody 1.0 beta 2 is finally available for download. This is an exciting release, not just because Melody is now more stable than ever before, but because we have made some exciting new enhancements as well. […]

This release has over 200 bug fixes, enhancements and changes contributed by numerous members of the community many of whom contributed for the first time

And don’t forget, we are only planning one more beta, so now is the time to download Melody and begin trying it out. If you encounter any problems we have folks standing by ready to help. (Official Melody Blog)

For those curious as to what Melody looks like from the inside, users can test out the latest beta for themselves upon Open Melody Demo which can give web masters a taste of the platform without having to install it upon their own server.

Although there is no word on how long the second beta round will last (let alone the upcoming third), hopefully we will see a finalized version unveiled soon as Melody could give Movable Type fans a reason not to defect towards WordPress. 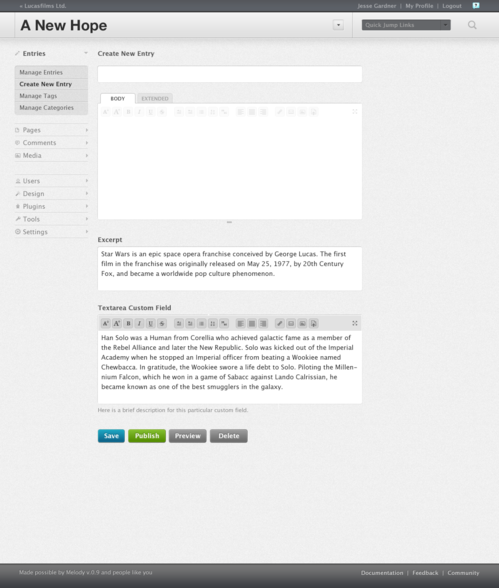 Melody, Movable Type’s cousin (and perhaps frenemy) is in the process of redesigning their user interface before their immanent 1.0 launch.

While the upcoming CMS is proposing a few odd changes to their future layout (i.e. putting the logo at the bottom of the admin page), the proposed layout seems eerily similar to WordPress. Developers working on Melody are claiming that the layout is borrowed from Movable Type 3 instead of WordPress (which could be true as I’ve never tried MT3), although truth be told it does look much nicer than Movable Type 4 (as well as Typepad). END_OF_DOCUMENT_TOKEN_TO_BE_REPLACED

Right now Say Media (who now officially owns Movable Type and Typepad) is in the middle of a firestorm after the President (Troy Young) insulted every small blogger utilizing their services with this statement.

Say Media expects to lose some subscribers to the Six Apart blogging platform. Its main focus, Young said, is in those that hope to build media businesses, rather than regular people who write a blog for fun.

“The kinds of people we want to work with are emerging media personalities,” he said. (AdWeek)

While the company attempts to pacify the rage and prevent many users from defecting to rival platforms, Say Media may find their ultimate hope in an emerging platform that shares Movable Type’s DNA (if not a passion for the platform as well). END_OF_DOCUMENT_TOKEN_TO_BE_REPLACED

Happy Monday, folks! Disappointing news for those of us waiting for the official Movable Type 5 release: It’s been postponed till January 5. In the announcement, Six Apart only says that there are issues to resolve so they’re waiting till after the holidays to release. I believe this is the third official release date we’ve had, let’s hope it’s the last one.

Byrne Reese has announced a new version of the Media Manager plugin. The previous version was broken by a change to Amazon’s API. Rather than patch the problem, Byrne did a major rewrite of the software to take advantage of an existing Amazon API library. As a result, folks upgrading from a previous version will likely need to update their templates. END_OF_DOCUMENT_TOKEN_TO_BE_REPLACED