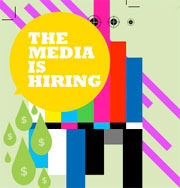 You might remember the interview with the folks behind The Media is Dying Twitter account, tweeting away about layoffs and other nasty things that is hitting old an new media hard in today’s financial situation. Well, now they’re optimistic, and spins off their Twitter account with a new one, called The Media is Hirin’, which is a lot more positive than the previous one to say the least. I caught up with the anonymous gang for a quick Q&A about this new venture.

TMIH is a resources that enables a person who has been laid off from the media industry to get back into it by creating a 140 character resume and post it up with their skills – we’ve had some amazingly creative entries.