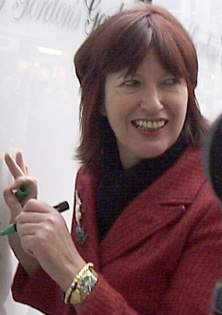 Janet Street-Parker, Editor-at-Large for The Independent, has hit out at the popular microblogging platform Twitter calling every person using the 140-character platform Twat in the same breath. Street-Porter who hit the headlines earlier this year with her controversial statements about Ian Tomlinson’s death seemed on a mission, using the flawed ‘Teenagers don’t use Twitter’ survey, and included both Gordon Brown and his wife Sarah in her vendetta, trying to remind everyone of the mindlessness of the platform.

…all twittering really delivers is the ultimate in mini-munchie banality. Instead of real emotion, in-depth opinion, considered arguments about why the NHS works, or the many reasons for not eating veal, what we get is breathless trivia. It certainly says bugger-all about what really happens at home with the Browns – which is why, presumably, Sarah, a former PR, loves it.

Twitter works for the middle class, the middle-aged and for work-weary wannabe trendies because it lets them feel they’re part of a big happening club, when in fact all they are doing is exchanging mindlessness. END_OF_DOCUMENT_TOKEN_TO_BE_REPLACED