Former Republican vice presidential candidate Sarah Palin has officially joined the ranks of Twitter addicts. The Alaska governor has so far amassed 12,096 followers (as of this writing).

“This is my official Twitter feed – from here I’ll provide updates on issues concerning Alaskans. Learn more about AK at www.alaska.gov,” the governor said in her first post.

Yesterday, she also posted her take on Swine Flu. “We still have no reported cases of swine flu. Be vigilant, AK! Wash hands & watch for flu-like symptoms. Go to http://tinyurl.com/c2avc4.”

Palin is following, among others, Bill O’reilly, David Gregory, Mike Huckabee, Arnold Schwarzenegger, Karl Rove and of course… John McCain. She is not currently following @BarakObama and me.

When asked in an interview with Sarah Palin on FoxTV, her first public interview after the election, if there were false allegations made that needed to be addressed, and Sarah Palin blames the media, with a minor slap against bloggers that is making the rounds of the blogosphere.

…if the media had taken one step further and investigated a little bit, not just gone on some blogger – probably sitting there in their parent’s basement, wearing their pajamas, blogging some kind of gossip or lie regarding, for instance, the discussion of who is Trig’s real mom…and that was in mainstream media, the question that was asked, instead of just coming to me and setting the record straight. And when I tried to correct that – that yeah, I’m truly Trig’s mother – to take days for everything to have been corrected…

Rumors are flying around that she is attacking and judging bloggers. While she does make a sweeping generalization about bloggers, one that we bloggers deal with daily, her point is to actually take the media to task for using blogs as a source of fact and fiction. END_OF_DOCUMENT_TOKEN_TO_BE_REPLACED 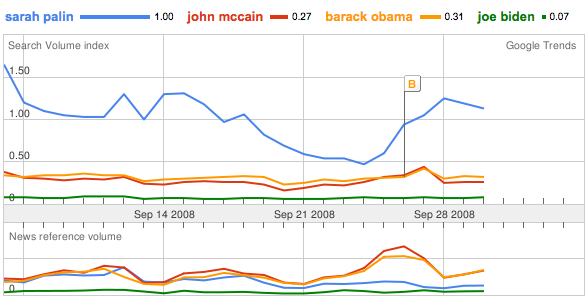 It’s been about four weeks since we first covered U.S. Republican vice-presidential nominee  Sarah Palin, the Alaska governor who vaulted from relative obscurity into international prominence overnight when her nomination took America by surprise a little more than two months before the November 4 elections.

Since then, the blogosphere and mainstream media have continued to buzz about Palin more than Barack Obama, the Democratic nominee for president; more than Joe Biden, Obama’s running mate; and even more than John McCain, the GOP pick for prez. END_OF_DOCUMENT_TOKEN_TO_BE_REPLACED

No surprise here, but the recent debate means more Twitter activity. Twitter reports that they had a 160% tweet increase compared to the same time the previous week, and that the daily update was up 18.5%. More stats in the Twitter blog post. The same also tells us that they’re polishing the Election page we’ve mentioned previously.

Wired’s Epicenter blog gets to wrap this up:

Or is it just because she’s a woman? END_OF_DOCUMENT_TOKEN_TO_BE_REPLACED