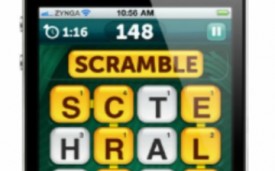 Zynga on Thursday announced the release of their newest game in the “With Friends” category, Scramble With Friends.

The announcement comes just one day after the company released Hidden Chronicles and marks the company’s determination to hit 2012 running after December met their IPO with skepticism and with shares in the company currently hovering around the $9 mark.

Zynga added to their “With Friends” category last year when they released “Hanging With Friends” a hangman type game that combines social gaming with friends.

Scramble isn’t actually a new offering for Zynga, they released a Facebook Scramble game as one of their earliest titles, it was eventually downloaded by 2.5 million Facebook users. However the new offering brings the game to the masses. As the name suggests users must find words from a Scrambled group of letters, the higher the word count the higher the score. END_OF_DOCUMENT_TOKEN_TO_BE_REPLACED