The company behind TypePad today announced the launch of an official AVATAR online community, in collaboration with Twentieth Century Fox, a month ahead of the release of James Cameron’s film on 18 December. 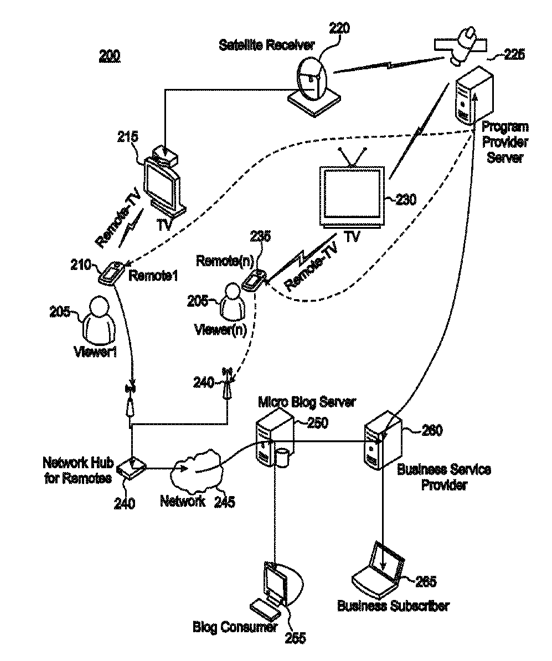 Digging through patent applications can bring up some interesting designs, such as this idea from IBM, filed last year and just now being talked about on blogs.

Realizing that there is still a degree of separation between mainstream home entertainment (TV) and mainstream blogging/social networking (Twitter/Facebook), IBM has come up with an idea to combine the two so that the everyday user can blog or tweet about something they’re watching on TV via a specially crafted remote control unit.

The geekier among you (me included) will probably roll their eyes and suggest that the separation needn’t matter — I can already tweet or blog from my laptop or iPhone while watching TV and it doesn’t matter to me that the devices are distinct. In fact, having tested out accessing basic web services from remote control units, I’d say it can be a pretty painful experience. END_OF_DOCUMENT_TOKEN_TO_BE_REPLACED

As more and more of my clients discover the terms social media and social web, they ask me how to use this new Web 2.0 concept of social. They are surprised when I ask them a few questions and find out they are already a part of the social web.

Here are my questions:

Then you’re a part of the social web. You’re using social media tools to communicate with others. So you know how to use the social web, right?

As discussed in “Exploring Social Media: Start With the Basics,” the basic social media tools are probably things you are already using. Using the social web means understanding how to use the tools to get your message across. END_OF_DOCUMENT_TOKEN_TO_BE_REPLACED