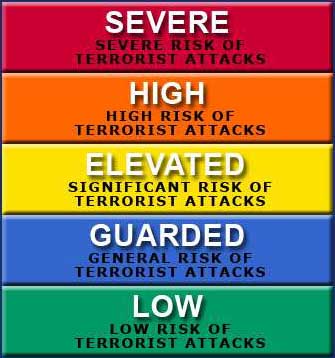 Terror alerts for the longest time were confusing, the U.S. Government created a color system (pictured to the left) that very few people understood and those alerts were often only spoken about on nightly news shows during sporadic times. Now the U.S. Government has retooled the terror alert system to make it easier to understand and with that retooling they are getting ready to launch online alerts through social networks, specifically through the use of Twitter and Facebook.

According to Yahoo News:

The U.S. government’s new system to replace the five color-coded terror alerts will have two levels of warnings — elevated and imminent — that will be relayed to the public only under certain circumstances for limited periods of time, sometimes using Facebook and Twitter, according to a draft Homeland Security Department plan obtained by The Associated Press.

Along with those online alerts will be a set of expiration dates for each alert sent, a method not previously used by homeland security.

It’s still unclear if sponsored Tweets will be sent out to Twitter users or if users will have to visit specific Facebook and Twitter pages to learn about current terror alerts. END_OF_DOCUMENT_TOKEN_TO_BE_REPLACED