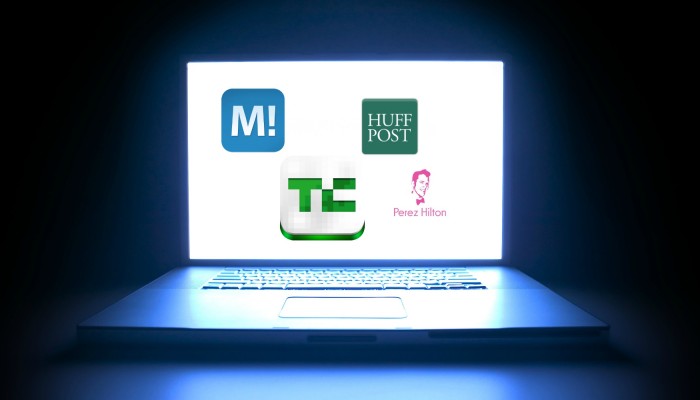 Despite being one of the biggest industries to follow the birth of the internet, the word “blog” still has somewhat humble connotations. Perhaps it’s because it’s so ubiquitous with the “do-it-yourself” mentality of the web—who doesn’t know somebody who’s started their own? But what average internet users don’t realize is that some of the most popular (and profitable) sites on the web are actually highly successful blogs.

From pop news sites like Mashable to advice sites like LifeHacker, many of today’s most popular online destinations began life as simple blogs; the vision of one person transformed into businesses that rival well-established print and web magazines. Each one is a story of success, and a testament to the power of dedication, hard work, and the ample opportunities the internet provides aspiring entrepreneurs. END_OF_DOCUMENT_TOKEN_TO_BE_REPLACED

After acquiring Weblogs, Inc. in 2005, AOL is rumored to be seeking to purchase the TechCrunch empire founded by Michael Arrington.

AOL, the New York-based online media company, is on the verge of acquiring TechCrunch, the online blogging network started by former attorney, Michael Arrington. The deal is at a sensitive stage and might fall apart yet, but I don’t think so. Sources familiar with both entities says that the announcement is likely to come onstage at Disrupt, TechCrunch’s flagship conference currently underway in San Francisco. (via GigaOm)

According to Om Malik, Tim Armstrong (AOL’s CEO) is suppose to make an announcement at the end of TechCrunch Disrupt, which unveils innovative startups that (as the name implies) can disrupt the industry as a whole.

There is still no word on what price AOL is offering Arrington for ownership of the TechCrunch empire, but we will update this post as soon if we hear of anything new.

If Om’s sources are correct and TechCrunch is assimilated by the AOL giant, we will probably see TechCrunch powered by BlogSmith instead of WordPress (the former which AOL thus far delcined to release to the public).

With AOL snapping up some of the largest blog networks around, the only question that remains is, “Who’s next?”

Facebook has been having some fun with the folks over at TechCrunch, rolling out a Fax This Photo feature for the tech blog’s writers only. Jason Kincaid wrote a post about this brand new feature, which doesn’t exist outside of the TC office, and then spoke to the Facebook PR rep.

We’ve been testing this product since 1992, and we are thinking that we will be launching this “innovative” feature at TechCrunch 50.

What do you think???

Hilarious, and obviously TechCrunch has to detail it all in a blog post.

Gotta love some good humored pranks. Question is, how will this affect the next Facebook post on TechCrunch?

Ryan Tate has the best post intro so far this year in the latest edition of Gawker-playing-Valleywag:

Remember when blogs were going to be fiercely independent firebrands who, purified of old media insidery stench, would pull no punches against traditional power structures? So much for that. Today’s laptop media is shaping up to be nothing but lapdogs.

The post is really about TechCrunch releasing those Twitter documents, and the rings on the water. I don’t care about that, old news, and really a lot of noise for typical journalistic behavior.

Yes, that’s right. Michael Arrington did what thousands have done before him, but on a blog rather than in a newspaper. So who cares? END_OF_DOCUMENT_TOKEN_TO_BE_REPLACED