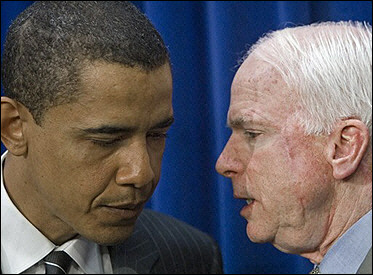 Update 1 Nov 2008: We’ve added several links. Thanks to Jackie Sheeler for making the first suggestion. Feel free to add more in the comments!

The 2008 US presidential election will be over in about 100 hours (unless Florida can’t make up its mind again).

There are, in fact, other elections as well next Tuesday. But of course we all know the real battle is Obama vs. Palin – er, McCain.

Without further ado (and before the comment firestorm begins below), The Blog Herald presents the best blogosphere and social media destinations to track Election Day 2008, in no particular order:

1. CNN Political Ticker – Yes, it’s a mainstream media site. But it’s also a blog. The differences are so blurry now in 2008 anyway. :) It’s common to see hundreds of comments on a post here as Election Day approaches. You can subscribe to twice-daily email alerts if you don’t want the barrage of zero-hour coverage to disturb your day off from work. Bias: Obama. END_OF_DOCUMENT_TOKEN_TO_BE_REPLACED

Or is it just because she’s a woman? END_OF_DOCUMENT_TOKEN_TO_BE_REPLACED