As always, if you want to see everything I am writing about nextMEDIA, please check out BrandingDavid.com where I’ve placed an index for all of the posts I am doing around the Splashpress Media network.

Only about 25% of people from last years nextMEDIA came to this years. The conversation has changed from definitions, to getting the big money through community models.

People want a $40CPM, does it exist and is it sustainable? Probably not, but they can be achieved through multiple revenue sources. Advertising, branded entertainment, e-commerce, pay per use, and licensing as a mix can earn more than direct ad sales or sponsorships alone.

Today we will hear more about engagement and reputation. There will be less about online video today, and more about immersive entertainment.

As the introduction for day two ended, we were then introduced to Susan Bonds, CEO of 42 Entertainment. Who started by saying that there is a way to measure engagement, though not standardized, everyone keeps trying to push that there is engagement metrics.

You need to tell a good story to gain engagement, and using the tools and mediums we have today, people can increase engagement.

She also let us know how great it is that people enjoy creating content and contributing it to “your” stories or brands through a community and collaboration that ignores borders, and boundaries, creating a powerful hive mind.

Susan then went over ARG’s, alternate reality game, which is an interactive experience that immerses audiences in story via content platforms that intersect their daily lives.

The audience has a central role: collect, solve, and piece together the story, and thus they influence the direction of the story.

It brings us towards social entertainment, and gives players ownership over the experience.

She showed a bunch of clips regarding alternate realty gaming. Most of them are branded in such a way that they promote a concept, movie, software, or other brand.

“The idea is that you really bring a story to life.” – Susan Bonds

Viral videos are hit or miss, and don’t really work well for building brands or gaining attention for a brand and so ARG’s can have a stronger, longer connection with people.

She mistakenly focused in on Microsoft as a company that creates experiences that aren’t always branded, and show only that the company cares for the various potential customers by providing themselves with something entertaining.

I don’t think Microsoft, and especially not their promotion of Vista should have been mentioned today, but it looks like 42 Entertainment has worked with them on a few project including working on IloveBees for Halo 2 which had 2.5M unique participants.

She also said that the hive mind of the people involved are able to come up with really advanced ways of finding the next clue. She gave an example of how a spectrograph on a song gave a clue, and the audience found it using their “hive mind”.

They even held a secret concert for those able to follow the clues to their conclusion, which was part of the “Year Zero” album for Nine Inch Nails which was even broken up by a fake S.W.A.T. team so they could really live the experience they were involved in.

The whole experience made me think “people are sheep”, as hundreds of people fallow these ARG’s blindly in order to have some sort of fun or access to an experience or event. Will this be the future of interactive advertising, and if so, will it be annoying? 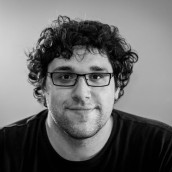