If the gymnastics and swimming weren?t enough to get you in the spirit of the Olympics, at least take a look at some of the many lessons the Olympics have brought to Internet marketers. Because the Olympics are so widely known, perhaps the most widely known brand of our time, they don?t have to do as much marketing as your traditional company. However, the Olympics have sparked other companies to incorporate the games into their marketing strategies. In addition, the games themselves offer up some important teachings for those in the marketing industry. Consider a few of the lessons you can take away:

Because content and engagement is so important in the world of online marketing, it makes sense to constantly be watching the news and trying to connect a story to something that is occurring in your city (or around the world in this rare case). Below is a list of 5 marketing strategies where different companies took advantage of the 2012 games:

Creating video is becoming more and more important for companies because videos can catch a readers attention much faster than a piece of traditional text. After all, YouTube is the second largest search engine after Google, and even Google+ has started incorporating YouTube with the new YouTube app for Google+ hangouts. Most companies create ?how to? videos for their businesses to help explain complicated information. It?s important that you have your audience in mind when creating the video and that you have a call to action, or a reason that the content of the video really matters.

Olympic Example: Many different companies tried to incorporate the Olympics into their marketing videos, but the Procter and Gamble ?Kids? video was one of my favorites. It helps pull in the audience because it explains how and why the Olympics can relate to your life. It shows that the athletes and the games are real, and someone had to raise them.

Nothing draws in people more than something that is interactive. More and more companies have been creating interactive infographics so that visitors can get a customized message, and even content such as polls can get visitors involved in your website. Contests are also a great way to get people to keep coming back to your site and tell their friends.

Olympic Example: Google decided to create what are called Google Olympic Doodles, or little, interactive games that Google users can play in just a few seconds. You can win gold, silver, or bronze, and it?s easy to compare scores with friends. They?re addicting and most certainly catching the attention of many.

What the Olympics Themselves Can Teach Companies about Marketing

Many new websites get a little bit nervous when it comes to posting controversial content. While this isn?t appropriate for all businesses, being the best in your industry means tell the truth and giving your honest opinion. If there is an issue in your field that?s getting a lot of press, show that you have an opinion.

Olympic Example: Kim Collins, sprinter from St.Kitts & Nevis, was disqualified from the Olympics because he visited his family, which is breaking the rules. Some thought that this was absolutely absurd while others agree with the Olympics decision. Although the Olympics may not have had a choice when it came to getting this story out to the public, they embraced it with open arms. The rules are the rules, and it?s too bad if you don?t like them.

It might sound cheesy, but no one understands competition better than Olympians. It?s extremely important to always be aware of your competition and then create your strategy based upon where you can really thrive.

Olympic Example: Cameron van der Burgh, South African swimmer, admitted to cheating at the Olympic games. His reason? ?If you?re not doing it, you?ll fall behind.? Now you should never cheat just to get to the top, and we?ve seen plenty of swimmers win the gold while following all the rules, but if this isn?t an example of really knowing your competition and using it to your advantage then I don?t know what is!

Have you seen any companies create a great campaign because of the Olympics? Is there any lesson that you could take from watching the actual games? Let us know in the comments below!

Amanda DiSilvestro is a graduate of Illinois State University. Although she graduated with an English Education degree, she found herself working as a full-time blogger at Highervisibility, nationally recognized as one of the best seo firms in the country. Connect with HigherVisibility on Twitter to learn more! 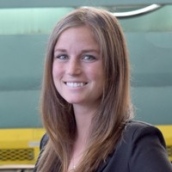 Amanda DiSilvestro is the Editor in chief for Plan, Write, GO. She has been writing about all-things digital marketing, both as a ghost writer, guest writer, and blog manager, for over 10 years. Check out her blogging services to learn more!