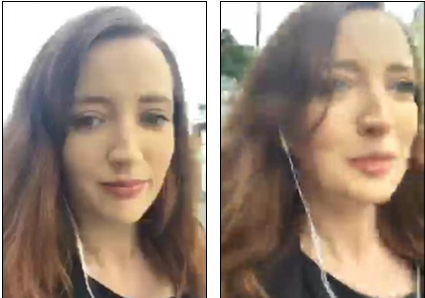 Popular blogger, BecBoop was live-streaming her morning commute on Periscope when something shocking was caught on camera.


Rebecca Casserly has amassed thousands of followers on her various social media outlets. Her fans tune in to see her various broadcasts, such as her morning commute. However, her most recent broadcast gave fans much more than they expected as it caught footage of Casserly getting mugged.

As more than 3,000 viewers watched, the footage showed Casserly screaming as the screen cuts to black. A man’s voice is heard and the sound of bike pedals turning as the mugger makes a quick getaway. Casserly spoke to the Daily Mail about the incident. She explains that for more than a year, she has been live-streaming her morning commute on Periscope, calling it “Coffeescope.”

“Every day, I get a coffee on my way to work and chat to people on periscope. I’ve done it every day for a year and a half,” Casserly told the Daily Mail. “Then a man with mask covering half his face came up to me and smashed the phone straight out of my hand.” Casserly also explained that when she reported the crime to the local authorites, they told her that gangs of muggers have been targeting commuters in the area. For now, Casserly will be broadcasting from the safety of her balcony, but she is thankful for very supportive fans.

“I’ve had hundreds and hundreds of messages of support from all over the world, the support is amazing,” Casserly shared.

You can keep up with Casserly on her fashion, beauty and travel blog, BecBoop.