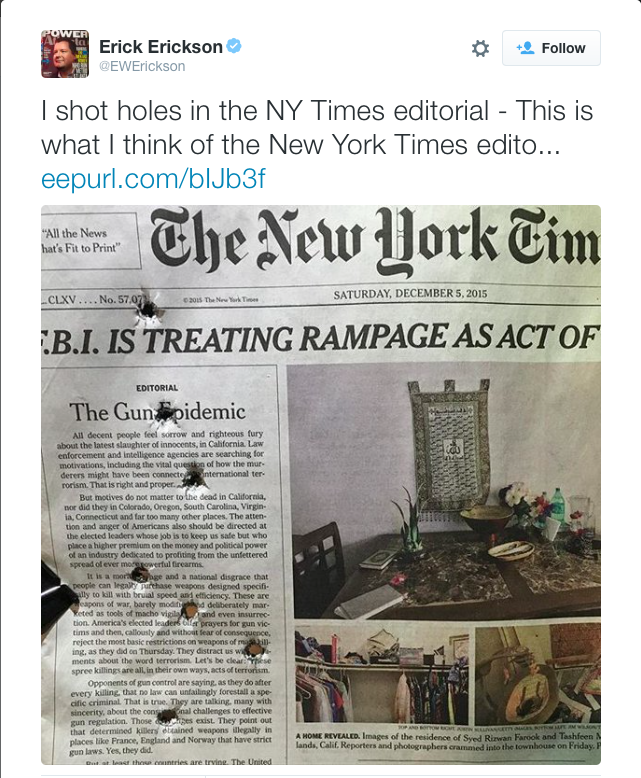 Conservative blogger Erick Erickson makes no apologies for shooting bullet holes in a copy of The New York Times that featured a prominent opinion editorial about gun control on its front page and then posting a picture of it online.

In a piece entitled “My Sincere Apology,” Erickson explains that he shot the front page of the newspaper with seven 9mm bullets, fired from top to bottom. He continues to say that he feels that the reaction that he received over the twenty-four hour period following this image has convinced him that he needs to apologize.

If you stopped reading the piece at this point, you may understandably but still mistakenly believe that Erickson is actually apologizing for the post, but as the post goes on, the conservative blogger explains that if he had known that his post would have gotten this reaction, he would have done it “a whole lot sooner.”

In all honesty, had I known that these last twenty-four hours would be as hysterically funny as they have been, I would have shot the front page of the New York Times well before today.”

Erickson’s… interesting (for lack of a better term) way of protesting any type of gun control legislation is just one additional voice to the raucous debate that’s happening in the United States over the rights of gun owners. The editorial itself was spurred on by the terrorist attacks in San Bernardino last week.

Though it is now widely believed that those attacks were carried out by violent radicals, at the time of the attack and just afterward, The New York Times and other pro-gun control advocates spoke out in favor of new gun control legislation. Gun control advocates seemed to have jumped the gun, so to speak, and it has just given the people on the other side, like Erickson, ammunition, so to speak, to use against the cause.

The editorial, entitled “End the Gun Epidemic in America,” marks the first time that The New York Times has published an editorial on the front page since 1920. The last editorial to grace the front page was a piece that criticized Warren G. Harding’s winning of the Republican presidential nomination.

Regardless of your position on guns, do you think that Erickson, the conservative blogger, went too far with his post? Let us know in the comments below.