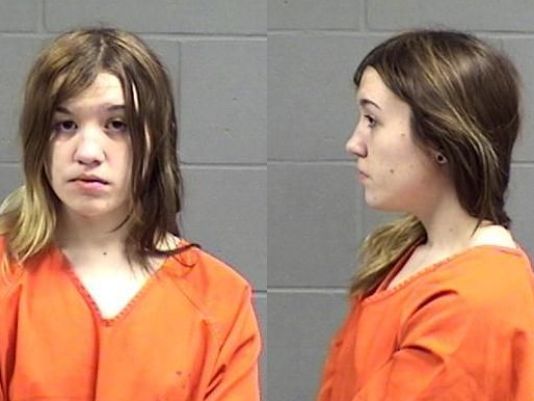 Ashlee Martinson was once known for her gruesome horror stories she posted online. Known by her online name of “Vampchick“, her readers would never have predicted that her tales of blood could become a reality.


The horror blogger is now serving a prison sentence after pleading guilty to killing her mother and stepfather. Martinson spoke out recently about the murder in an interview for ‘Crime Watch Daily With Chris Hansen’.

Authories says the teen shot her stepfather twice with a shotgun before stabbing her mother more than 30 times. She then fled the home with her 22-year-old boyfriend. She was arrested the very next day.

However, Martinson explains that she didn’t mean to kill them. She says she originally planned to kill herself.

“I took [the shotgun] back in my room, and I was sitting on my bed. This was it for me. I was done, I needed to get out. This was the only way. I even had the end of [the gun] in my mouth, playing with the trigger. It’s done,” she tells Hansen. “And then I heard my stepdad, and he was starting to go up the stairs, and in that moment I knew I didn’t really want to die.”

She also claims that she suffered years physical, mental and verbal abuse at the hands of her parents. She says she decided she would have to kill them to protect herself and her siblings.

“I’m happy because I’m getting help right now,” Martinson says. “My sisters are safe, and I know that sounds crazy because I’m in prison, but I feel like I’m free. I can have an opinion now. I can have my own thoughts. I can wake up everyday and know that I’m safe.”

The full interview will air on Tuesday on ‘Crime Watch Daily.’ You can check local listings to find out where you can watch.