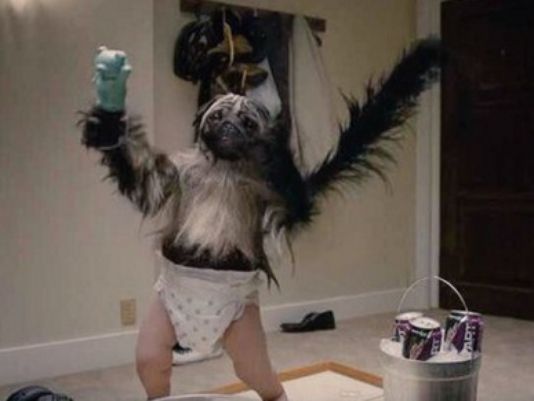 We’ve had weird Super Bowl commercials before, but this year, Mountain Dew’s new Kickstart commercial truly took weird to a new level with the unfortunately unforgettable Puppymonkeybaby. The advertising agency that came up with this really strange ad definitely understands viral content; Puppymonkeybaby is just the kind of commercial that takes on a life of its own on the Internet, making it much more than just a Super Bowl ad. Puppymonkeybaby has suddenly become an Internet sensation, and in the hours since the ad was aired during the Super Bowl, Twitter has spoken.

If you missed the commercial during the Super Bowl, here it is. Three guys are hanging out and watching TV when, suddenly, a Puppymonkeybaby, literally a figure with a pug’s face, a monkey’s torso and arms and a baby’s legs, walks into the room and offers them Mountain Dew Kickstart, a drink that combines Mountain Dew, juice and caffeine. I’m not sure why I’m trying to rationalize this, but the Puppymonkeybaby is a really weird analogy for the Mountain Dew drink. It’s three things combined… get it…?

Ummmm. #puppymonkeybaby freaks me out

@alroker Hey now, on Wednesday you wanted to meet #puppymonkeybaby. Guess we will just cancel that flight to NYC. pic.twitter.com/nw73GBtFox

But many people loved the strange commercial.

Obviously, Puppymonkeybaby was the only thing that could be responsible for Eli Manning’s face in this shot.

What do you think about Puppymonkeybaby? Does it make you want to drink more Mountain Dew? Let us know in the comments below.