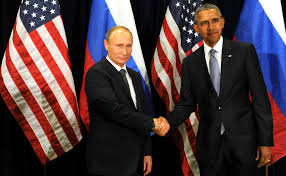 Yesterday at 13:55 (MSK), 2 A-10 attack aircraft of US AF entered Syrian airspace from Turkish territory made strikes on objects in city

The United States is refuting Russia’s charges. Colonel Steve Warren, spokesman for Operation Inherent Resolve, tweeted out that what Russia has said on Twitter is simply wrong, but that hasn’t stopped Russia from continuing to tweet about the incident. Russia’s official Twitter profile has even singled out Colonel Warren specifically.

.@MOD_Russia's tweets are wrong. Furthermore their bombing is reckless and indiscriminate and their efforts are strategically short-sighted.

The Pentagon has assured the world that the United States did not have aircrafts over that region, but this Twitter feud between two of the biggest countries in the world has serious implications for the future of United States – Russia relations.

Taking the fight to Twitter signals a change in the way that the United States and Russia are approaching their differences. Rather than physically fighting one another on a physical battlefield, Twitter has opened up a massive public channel for the two world powers to taunt one another and accuse the other or some misdeed.

Waging the battle on Twitter makes it incredibly public, and thus embarrassing for, in this case, the United States. Whether or not the United States actually conducted this airstrike in Aleppo, the sheer allegation is enough to make people question the United States’s strategy for the region at large, especially at a time when Secretary of State John Kerry’s peace talks are on the verge of success.

How has social media changed the way war is waged? Does it matter than Russia accused the United States of this act on Twitter? Is it a Twitter Cold War? Let us know what you think in the comments below.