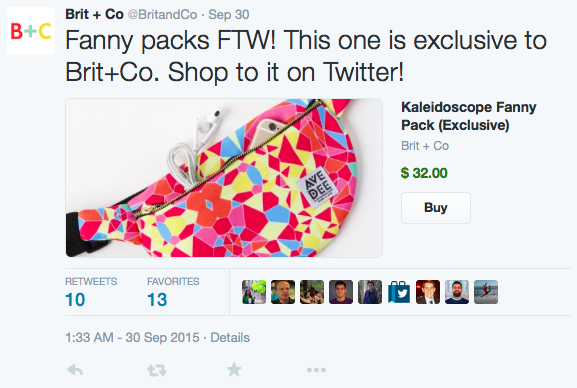 Twitter just gave us a new way to purchase things on the web: buying via tweets. Vendors using one of the three major e-commerce sites will now be able to sell to their customers directly through their Twitter timeline; merchants can now embed a buy now button into their tweets. Twitter’s buy now button will undoubtedly shake up e-commerce, making it easier for merchants to connect with and sell to their customers.

Twitter has been testing this technology for some time, and it is finally available to any vender who uses Demandware, Bigcommerce or Shopify as their e-commerce platform.

Cynics may argue that Twitter’s buy now button is just another way for companies to push their product into what some deem a practically sacred space, their social media timeline. While the cynical view may be poignant to some, it’s good to remember that Twitter has opened up this service to venders of all sizes, giving your local Etsy merchant the same capabilities to sell to his/her Twitter followers as huge corporations (Coca-Cola, Nike, Google etc.) have to sell to theirs. (Additionally, with the exception of promoted tweets, you have to follow these companies to get their tweets with the option to buy their products.)

While this new capability may help move some product for bigger companies, Twitter’s buy now button is huge for small businesses who are intent on selling their products online (and who isn’t?).

It is clear that this new capability will make Twitter (and social media more generally) even more vital to a company’s marketing campaign that it already was prior to its release. For now, Twitter’s buy now button is only available to U.S. merchants, but it’s clear to see where the puck is going. With Twitter’s 316 million global user base and the implementation of this new button, merchants can no longer realistically ignore Twitter.