The last 10 years or so have seen online publishing startups such as Mashable and Gawker Media jostle for position with many of the traditional publishers such as the BBC and the New York Times. The team at Infographiclabs created a fantastic visual representation of this in the Infographic below. 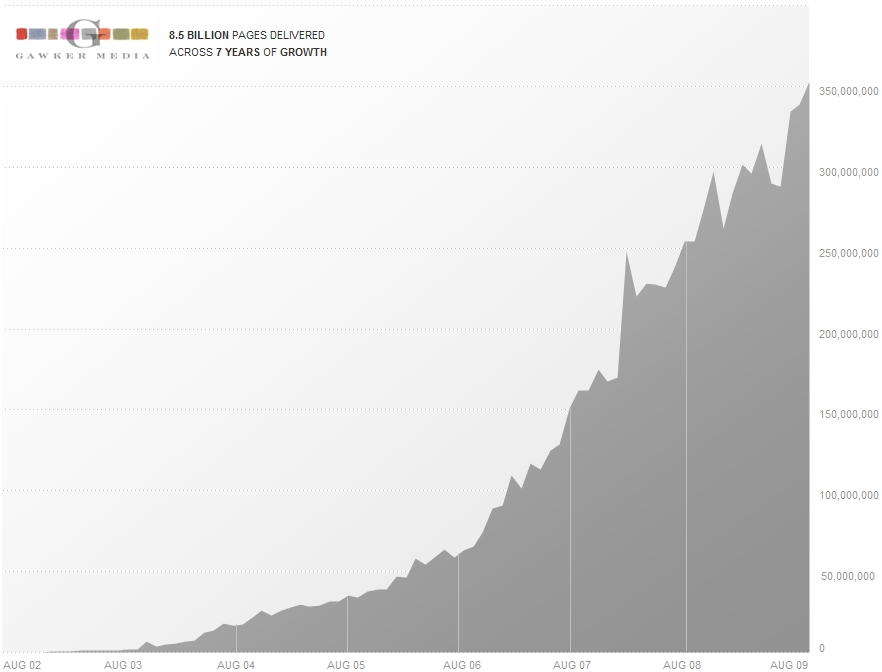 Most importantly, this is a low-risk commercial experiment. Most media companies suffer from overblown editorial, an ad sales force with padded expense accounts, and overly complex publishing systems with a team of primadonna sysadmins to maintain it. By contrast, Gizmodo will be a couple of hours a day of Pete’s link-picking skills, some automatically generated Amazon.com links, and $150-worth of Movable Type. Media has never before been this lean. END_OF_DOCUMENT_TOKEN_TO_BE_REPLACED

Ever since Defamer was merged into Gawker earlier this year, I’ve been looking for the right person to hire in L.A., so I’m pleased to announce someone who was worth the wait: Richard Rushfield is joining Gawker as its new West Coast Editor. From his Venice bungalow he’ll proudly fly the Defamer flag as well as pitch in with charting the general editorial direction of the site.

Richard Rushfield is slated to start at Gawker on August 31st. He was previously the Entertainment Editor at Los Angeles Times, which should fit the Defamer part of Gawker perfectly. The Defamer brand was merged into the main Gawker site in February this year, after failing to sell it. Read the full memo at Bloggasm.

Ryan Tate has the best post intro so far this year in the latest edition of Gawker-playing-Valleywag:

Remember when blogs were going to be fiercely independent firebrands who, purified of old media insidery stench, would pull no punches against traditional power structures? So much for that. Today’s laptop media is shaping up to be nothing but lapdogs.

The post is really about TechCrunch releasing those Twitter documents, and the rings on the water. I don’t care about that, old news, and really a lot of noise for typical journalistic behavior.

Yes, that’s right. Michael Arrington did what thousands have done before him, but on a blog rather than in a newspaper. So who cares? END_OF_DOCUMENT_TOKEN_TO_BE_REPLACED

CBS Interactive has recruited blogger Richard Lawson from Gawker, according to Silicon Alley Insider who also has a quote from Lawson:

I’ll basically be doing what I do now, just probably fewer posts a day plus some actual reviews and stuff. I’m excited/nervous/gassy. All that.

Richard Lawson is one of the key entertainment writers on Gawker, and apparently averaged 2.4 million pageviews per month which is top of the bill according to the SAI story. In other words, a blow to the Gawker Media network, not only by the loss of a writer but also in pure money since it is unlikely that his replacement will reach the same levels quickly.