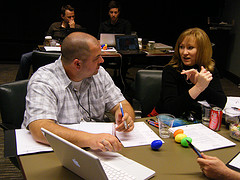 Among all the social media tools I’ve been exploring in this series, this is one of the most important ones: understanding the influence others have on you to help define your social influence. END_OF_DOCUMENT_TOKEN_TO_BE_REPLACED

Earlier this month, Daily Blog Tips interviewed Timothy Sykes, who is making more than $50,000 monthly with his blog:

You claim to have earned $45,000 from your blog last month, and that your traffic is 3 times smaller than John Chow’s one. How is that possible?

My business model is different, he’s all ad and affiliate-based, while my focus is on creating educational products through my own publishing company, BullShip Prress, LLC, namely my PennyStocking Instructional DVD that makes penny stock trading understandable and TIMalerts, a real-time trading alerts subscription service, both of which I promote endlessly through my blog.

Mind you, I tried Chow’s business model—admittedly only half-heartedly because I have problems promoting all the frauds in finance–but it didn’t work for me…so I adapted.

It’s an interesting interview to read primarily because of the discussion around the question above. Timothy’s income is less about advertising and affiliate income and more about using his blog as a method to promote his product lines – and then pocketing the much higher profits when those products are sold.

As we continue with this series on blogging jobs, it’s time to look at the income a blogger can make by blogging for pay.

The skills and qualities a company or blog owner is looking for from a blogger are extensive, far beyond just writing abilities. As with any freelance job, determining how to put a value on the time it really takes, and the costs associated with the time and production, is really hard when the real cost is in time, not materials. Bloggers should be paid for the time as well as their expertise and abilities. Are they? This is a problem that has been around for a very long time. How much is your time worth?

For many decades, professional editorial writers found a compromise on the time/value issue with payment by the word with a restriction on word count. I often was told, “We’ll pay you a dollar a word up to 1,000 words maximum.”

This meant the magazine, newspaper, newsletter, or other print publication had space for one thousand words that needed to be filled. Going over meant changing their magazine or newspaper design structure. Giving them less meant I’d be paid less, but somewhere in the middle was a compromise for both of us, usually in the form of me setting a minimum fee I was to be paid, no matter the word count, such as “I want $500 minimum for 700 words and a dollar a word thereafter.” If the article came it at 400 words, I would still be paid my minimum. If it crossed the 700 word mark, at which point I should have been paid $700 for a dollar a word, that’s when they have to start paying me the dollar a word rate. It wasn’t the best, but the companies felt like they were getting a deal and for the most part, I covered the minimum I needed to pay my rent and eat.

Here is a chart for the various traditional writer’s pay scale based upon a dollar amount per word. The more experience and expertise, the higher the fee per word.
END_OF_DOCUMENT_TOKEN_TO_BE_REPLACED

In “Blogger Jobs: What Are They Looking For?” we talked about what jobs are out there and what blog owners and companies are looking for when they hire a blogger. Blogger Jobs: How to Apply For a Blogger Job? covered how to apply for a job as a blogger, with some good tips on what to do – and not to do. Today, I want to look at a very serious issue: How much are they paying bloggers to blog?

The issue of the blogging pay scale is very important, not just because I’m one of the workers in this new industry who expects to be able to pay the rent or meet a mortgage, but also because I represent the hundreds of thousands, possibly millions, of people who want to make money blogging.

In a NY Times article on the blogging sweatshops by Matt Richtel (Print Version) the description of people of one of the hottest jobs in the world has writers churning out mass volumes of content working around-the-clock to make enough money to survive. It’s called blogging.
END_OF_DOCUMENT_TOKEN_TO_BE_REPLACED

Blogging is about writing, however, as we found out in Blogger Jobs: What Are They Looking For?, working as a blogger is so much more.

Let’s look at where to find blogging jobs and how to apply for one.