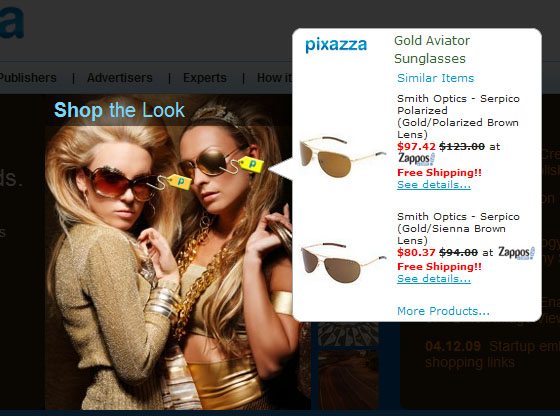 To be honest while I was exploring this new income-generating scheme offered by Google-ventures back Pixazza, the first thing that came into my mind was those in-text advertising that pops-out whenever you hover onto link in a blog post. Only this time, Pixazza is doing it with blog images.

So what is Pixazza really?  In their own words:

Pixazza is a new platform that allows shoppers to buy products from photos seen on websites of our web publishing partners. Our unique capability allows these web publishers to generate  incremental revenues by “visual commerce enabling” the images that already exists on their websites.

END_OF_DOCUMENT_TOKEN_TO_BE_REPLACED

Update: Here’s the  link to Matt’s post at the WordPress Publishers Blog explaining his appearance on stage at the PDC.

When I asked a couple of days ago why Matt Mullenweg was in Microsoft’s PDC, I was never really expecting Matt to read my post and answer the question. Back then, it was just reported that he was called onstage by Microsoft’s Ray Oozie but what he talked about was not reported yet then.

A good fellow that he is, Matt was kind enough to leave a comment on my post and posted the link to the transcript of what transpired during the PDC, particularly on what he talked about. END_OF_DOCUMENT_TOKEN_TO_BE_REPLACED

Recently, startup Pikk.com joined the ranks of Digg, Mixx and other social news/blog links aggregation sites.  In the company’s own words:

Pikk is a link aggregation service that lets users submit and vote on stories. Every story is submitted with two choices, such as “thrive or fail.” Stories with the most votes make it to the front page.

END_OF_DOCUMENT_TOKEN_TO_BE_REPLACED

According to reports, WindowsAzure will let Microsoft’s corporate clients to write code on a cloud-based OS running on Microsoft’s data centers. WindowsAzure is about to go live sometime in January. It’s obviously a paid service which will have business corporations as the main clients.

But what was Matt’s business there? END_OF_DOCUMENT_TOKEN_TO_BE_REPLACED

Of course you all know who we refer to as the father of the web, right? – The one and only Sir Tim Berners – Lee. Berners-Lee is set to go on a trip to Africa, particularly Kenya and Uganda, to meet with several government leaders, educators and development workers. Part of the discussions that will be held during the meetings will be on various local web initiatives relating to health and education.