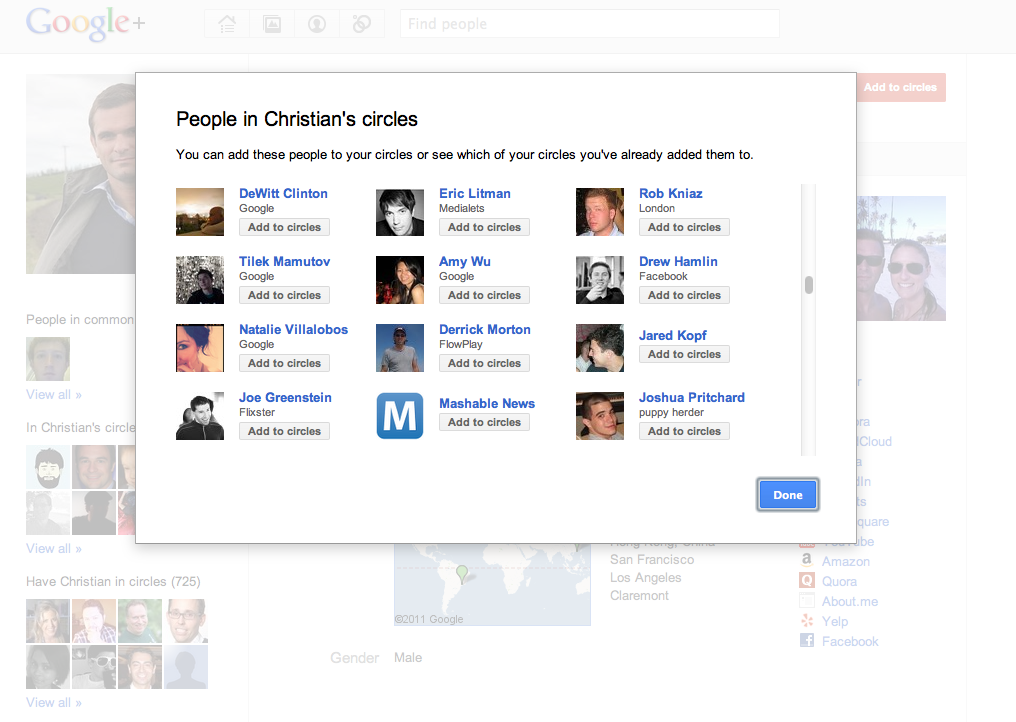 Online business owners are to face a dilemma. In an announcement on Google+ team member Christian Oestlien announced that they will actively shut down business profiles.

Business profiles have been becoming more and more present on Google+, but were outlawed from Day 1 according to the ToS: END_OF_DOCUMENT_TOKEN_TO_BE_REPLACED

Skype, the much hyped internet chat and VOIP solution, used by many web geek since 2003 already, has now become a core part of the internet’s social network giant Facebook. In a rather unsurprising ‘Something Awesome’ event hosted by the Palo Alto network’s CEO the since days leaked already news was confirmed.

Newsflash: Skype was first launched in August 2003 and had an estimated 663 million users (in Summer 2010), more than the social network almost a year later. While the chat feature of Facebook has been a rather uneventful and often frustrating experience since it launched in 2008, the question to be asked is whether the collaboration with Skype will help Facebook to continue growing? END_OF_DOCUMENT_TOKEN_TO_BE_REPLACED

When everyone jumped on the Google+ bandwagon over the last 24 hours, just before realizing that Google+ is a rather boring network without all your nephews and their three cousins absent from the select Club by Yourself, one of the first things users liked were Google Circles. As Paul Farol correctly pointed out in his First Look at Google+, Facebook already has a similar feature and it’s called Facebook Lists.

The main issue with Facebook Lists is that they are horrible to create and maintain, except for OC list users like me. There’s no hiding the truth, it is a burden to create and manage list (Bonus: the same applies to Twitter). With the smooth Circles UI of Google+ the game seems to change though and it didn’t take long before the same functionality came to Facebook. Albeit via a ‘hack’, or a third party application. END_OF_DOCUMENT_TOKEN_TO_BE_REPLACED

What does it take to create influence on Twitter? Giving you a full answer to this question would most likely fill more than a quick post you are here to read for. However one of the things which are a sure key to be more awesome on Twitter is to create great content – consistently. Let me therefore tell you about a new Twitter App called Buffer. It will help you to achieve exactly that in a super simple way.

What you do with Buffer is you put a few tweets in your Buffer, say in the evening for example. The app then schedules these tweets for you during the day – that’s it. END_OF_DOCUMENT_TOKEN_TO_BE_REPLACED

We recently have published the excellent The History of Online Video infographic and some months ago already had the Google’s timeline so it is no surprise that our next infographic the story of Youtube visualises.

The startup, launched in April 2005 was sold to Google only 18 months later for the sum of USD1.65 billion. Even after the acquisition by the Palo Alto search giant, the video platform continued to grow and is now one of the most popular websites in the world, hosting billions of videos and playing more than 2 billion videos every day. Often marketing campaigns heavily rely on Youtube plays and many artists use the platform as well as MLM marketers.

Thanks go to the crew at Infographiclabs for another graphic.