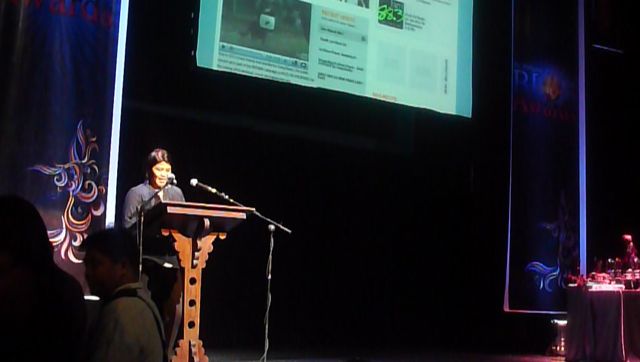 The Philippines celebrated its first leg of the third Philippine Blog Awards last year. As the country is physically divided due to the nature of its terrain (7,000+ islands) the awards was split into three regions to give context to cultural influences of every region. Radio host and an advocate for youth volunteer efforts, Gang Badoy was invited to deliver the keynote for this year. The past two months in Manila have been emotional for most, with murders, epic floods and typhoons and the upcoming elections turning bloggers more and more vigilant. What an honor and a frustration to be given ten minutes to address, perhaps (arguably) the most eloquent group of people ever gathered in 2009. But here I am, so here I go.

I cannot discuss any other ‘angle on blogging’ tonight except my gratitude to bloggers. During a crisis- you have kept many of us informed, during darker times – you, blogger have inspired, during births – you spread the joy and during death – many of you have rendered those who have gone before us immortal. There is no single phenomenon that has done all those in such a level.

Your personal thoughts, observations, factual research even urgent yet seemingly trivial emotions have contributed greatly to us who read you. Imagine how wide the understanding of the next generation will be of us who have gone before them -because of your blogs. Mas maiintindihan nila kung saan tayo nanggaling (They will be able to better understand where we came from). For me the best description of one who loves his country is someone who is interested in where we came from, where we are today – and where we want the country to go. Imagine the advantage the next generation has because they have our blogs to refer to. END_OF_DOCUMENT_TOKEN_TO_BE_REPLACED

The FTC has finally dropped the hammer on paid reviews. This finally settles the long debate about blogging and ethics. Whereas before it was all about your moral code, today it is now a legal mandate. Bloggers, according to the Federal Trade Commission should have full disclosure for doing paid reviews, or suffer consequences.

Interestingly enough, the “consequences” may actually be paid by the advertiser:

To placate such fears, Cleland said the FTC will more likely go after an advertiser instead of a blogger for violations. The exception would be a blogger who runs a “substantial” operation that violates FTC rules and already received a warning, he said.

So what this really means: there’s nothing to be worried about if you’ve been a good boy.

After a month of transition, the new 9rules network has announced a new round of blog submissions. They will be accepting blogs for the next 24 hours. If your blog philosophy falls meets the criteria of the 9 Rules, by all means, submit. 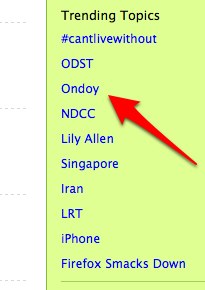 UPDATE IV: Splashpress Media is conducting a network-wide fund drive to help the Philippine National Red Cross. We have badges and banners which you can embed into your blogs.

UPDATE III: This video will help give perspective on how ‘Ondoy’ affected the Philippines. Thanks to Carlos Celdran. Here is some information on the International donation efforts.

UPDATE II: Google Philippines has joined the efforts by helping large TV networks contextualize the disaster areas. The link to the team and the maps can be found here. If there are others missing, please contribute to this page.

UPDATE: You can proceed to Philippine Aid for donations and more information about the Ondoy aftermath. So far, the site has raised USD $6,000.00 in donations from the International community. Thank you very much!

Hi, this is Jayvee Fernandez, chief editor of Splashpress Media. As you may have witnessed in mainstream media, the blogs, and Twitter (we are trending), the Philippines (where I’m from) has been hit by the worst flood in recent history because of typhoon ‘Ketsana’ / ‘Ondoy.’ The media has labeled this an epic flood since 1967. One month’s worth of rainfall in the span of 6 hours. It is so epic, it has its own Tumblr account. As I write this entry from a safe refuge, I cannot say the same for many other citizens and blogger friends who have had their material possessions, including cars, washed away. A detailed account can be read here, courtesy of Manolo Quezon.

The local blogging community has been adamant and vigilant disseminating information about relief centers, hotline numbers, donations and other such efforts through Facebook, Twitter, and our other local social networks (we’re glad that most still have Internet, despite cellular networks conking out). it is during times like these when we realize how powerful social media can be in the absence of conventional networks.

Details on how to help after the jump.
END_OF_DOCUMENT_TOKEN_TO_BE_REPLACED 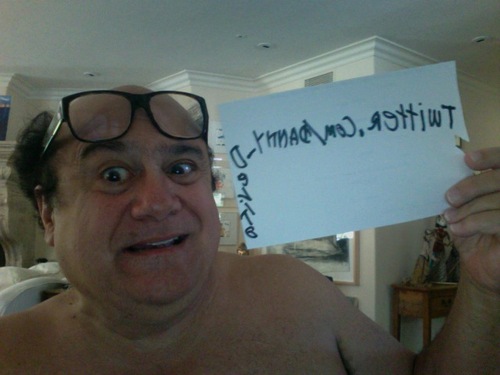 Actor and comedian Danny Devito finally joins Twitter. Two things: the guy’s definitely on fire and this is probably the reason why he’s not wearing a top. Of course, the public’s response is immense.

We’re not sure if Danny will be Tweeting much, as he’s only had one update in the past 6 hours — but yeah, his profile pic is Tweet bait right there.