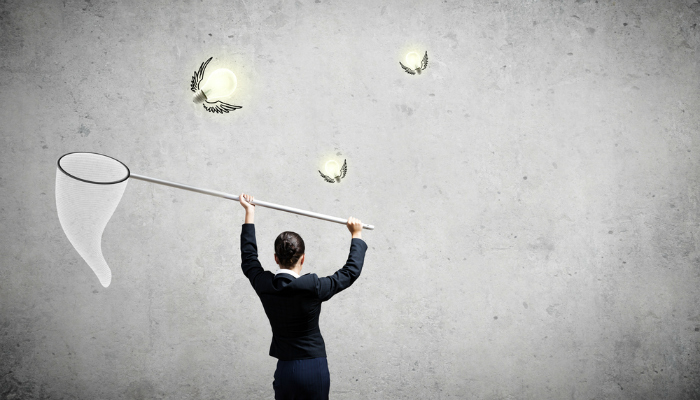 All avid bloggers know that coming up with fresh ideas for content is one of the most challenging aspects of the trade. Sometimes you have to put in the legwork and do some research to find trending topics you can piggyback off of, while other times inspiration strikes you in the most random of moments.

In scenarios like the latter, it can be inconvenient — or even downright impossible — to capture your ideas right then and there. What if you’re in the shower, driving or with friends? If you’re not prepared, you probably would try to commit that topic to memory and come back to it later. But as we all know, that leaves the very real possibility that you’ll forget it entirely.

So instead of leaving your best blogging ideas to chance, here are some ideas for quickly and easily retaining them until you’re ready to use them.

Catch Them in the Moment

If you wait even a few minutes to capture an idea, it could mutate into a less brilliant version or slip away entirely. Instead, be ready in any situation to jot it down. Three of the best ways to do this include: Sometimes just having a good, old-fashioned notebook and pen handy can make all the difference. One of the most ideal spots to keep this is right by your bedside, as great ideas sometimes hit you before you fall asleep, during the night or immediately upon arising. Consider carrying a small version of this with you at all times, either in your car, purse or backpack, so you can quickly access it no matter where you are.

Maybe you’re a digital devotee. In this case, relying on an actual notebook wouldn’t come naturally to you. You can achieve the same objectives with your phone, as long as you’re prepared to do so. One idea is to get the Samsung Galaxy Note5 smartphone (not a Note7!), which comes with a practical stylus that can be used without even waking the device.

If you’re the kind of person who prefers to write rather than type, but likes everything to be stored in a digital fashion, then this method is right up your alley. Alternately, some bloggers like to keep their ideas in a notes app, which can also be useful. A tip for this, however, is to keep your app of choice as a standalone app on your home screen (as opposed to grouped within a folder), so it only takes an instant to get to a blank notes page.

In other moments, you may be unable to safely write something down in a notebook or on your phone. When you’re driving or caring for a child, for instance, you can’t take your eyes away from what’s in front of you. A voice recorder is invaluable in times like these.

Most smartphones allow you to access your voice recorder by voice too, so you don’t even have to use sight to navigate to the app. You can then record your thoughts by voice and have them automatically appear as text in Evernote, if you’re an Android user, or through the Voice Texting Pro app by Apple if you’re an iPhone user. You may have to clean up your notes later since voice recorders don’t always capture the spoken word with perfect accuracy, but these programs have improved over time and will help you get the vast majority of your idea down without having to move your eyes or lift a finger.

How to Grow a Following on Medium: Our Best Tips

Make Them Accessible to All Involved If you run your own blog, you should be fine following the advice above. But if you contribute to a blog, along with someone else (or several others), you need to have a way to conveniently share your ideas in a snap.

Some writers who collaborate on the same blog hold phone calls in order to brainstorm topic ideas. If this sounds like you, then you might want to get the Call Recorder app. Just as you’d imagine, this app can record your calls and deliver an audio file to you afterward (to be accessed by whomever you’d like). This frees you up from worrying about jotting down your ideas as you discuss them, so you can focus on brainstorming and then organize the ideas later.

Another great way to work together is to use the Google drive app and share documents. You can get this app for Androids or iPhones, and can quickly input a thought before it leaves your mind. This will then automatically appear for your co-collaborators who open the shared document, helping you capture your idea in the moment and saving you the time of having to share it via email.

Just as every blogger has his or her own methods of writing, each one of you will also have your own preferences when it comes to creating and capturing new content ideas. The key is to consider which of these options suits your personality and lifestyle and then remain consistent. With a little preparation and intention, you don’t ever have to let another phenomenal idea slip away again.

This post was written by Rebecca Hasulak, the author of “DIY PR: Public Relations & Content Hacks for the Lean Start-Up” and owner of Quotable PR & Content. She is happiest when writing, practicing Bikram Yoga and spending time with her daughter and loved ones.