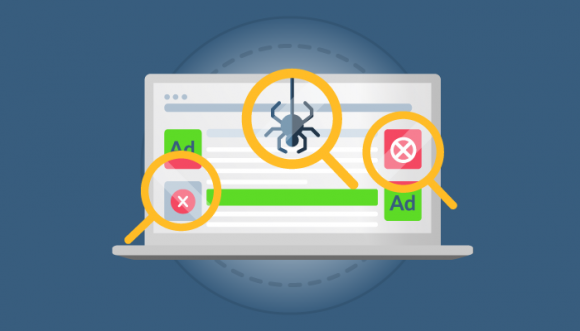 Selling ad space on blogs has always been one of the most common ways of making money online. However, nowadays it has become much more difficult for a blog to stand out online today than it once was. The picture is further complicated by the widespread ad fraud which has become a very serious issue over the last decade.

Bloggers get caught up fighting, hackers try to exploit websites for ad fraud, and advertising networks set up traps for defrauders.

You need to be aware of how this battle might be raging in your blog right now without you even knowing!

What Are Malicious Ads?

There are a number of different forms that ad fraud can take. These are constantly evolving as new threat vectors appear all the time.

For example, a common type of malicious ads is a video getting loaded in an invisible frame. It is either loaded beneath a static advert, embedded into a video player that is 1 pixel in size, or is rendered off-screen so it would be undetectable to the user.

These adverts not only defraud unsuspecting advertisers, they also drain the data of users who happen to visit the webpage.

While they might only see a simple image displayed on their screen, it’s possible that there are actually a number of video players layered beneath the image.

Other malicious ads are those that lie to their publishers about the website that they are being displayed on. These adverts forge various HTML referrals in order to make it appear as if the advert is being displayed on a different website.

Illicit websites use this technique to impersonate other websites and monetize their traffic, which is otherwise impossible.

Old blogs are often victims of these practices as hackers insert malicious code and ad placements without the knowledge of the blog owner.

This is why there is an incentive for them to hack into your blog – they stand to make a lot of money from ad fraud!

All of these ad fraud methods cost advertisers millions of dollars every year, and companies are looking for ways to check whether their ad campaigns are reaching the people they want.

What is Ad Verification?

Businesses pay advertisers lots of money to have their adverts served up to specific demographics and websites. Ad verification refers to the process of checking whether those adverts are being served up correctly to users.

Ad verifiers use a number of sophisticated methods to work out what context ads get displayed in. They then send reports back to the commissioning business.

The science of ad verification has come a very long way over the last several years, and there are many methods that advertisers can use to verify that their ads are displaying correctly.

In some cases, ad verification companies use internet proxies to simulate a user connecting to a web page where an advert is placed.

They can then use a number of beacons that are embedded into the advert media itself to ascertain whether the web page is suspicious.

How Does Ad Verification Work?

The purpose of ad verification is not what you might think – it does not prevent fraudulent adverts from showing up on your website. Instead, it lets advertisers identify the unreliable websites as early in a campaign as possible so that no further time or resources are spent on them.

Advertisers use ad verification to make sure that their advertising budgets are being wisely spent. It also encourages publishers to ensure that they are being open and honest about their site traffic and the way that they represent it to advertisers.

Blog owners used to shoulder all of the responsibility for ensuring that their platforms were being used appropriately, but ad networks and verification services have spread this duty out.

It is common for bloggers to monetize their websites through ad networks like AdSense. These networks are intermediaries that serve up appropriate adverts for their audience.

Unsurprisingly, they also set up elaborate ways to battle ad fraud. Even though there is no perfect method of detecting ad fraud, and fraudsters have gotten good at staying one step ahead of the game, there are several methods that, when combined, make it much more difficult to fool ad verifiers.

One of the most prevalent ways to verify an ad campaign is to check for fake website traffic. Fake traffic is generated by bots, which is why ad security companies set up simple bot traps to protect the budget of an advertiser. A lot of fake traffic with extremely short sessions is also a sign that your blog might have been hacked.

A bot trap is a simple 1×1 pixel object embedded on a web page. To a human, this pixel is invisible, but a bot will have no trouble identifying it. Bots click these pixels and alert advertisers about fake ad clicks happening on a website.

Some fraud cases have more elaborate ad click schemes, but most bots aren’t that smart, as they are only designed to carry out simple tasks. It is really easy to fool them by using redirects, preventing them from ever being able to click through an advert and perform an action.

Ad verifiers can lay another sneaky trap for bots by implementing a timed redirect. This timed redirect leads the bot to a blank webpage, rather than enabling it to click through to the advert’s landing page.

This redirect vanishes after 200 milliseconds — far too fast for a human to react to —  but a bot has no problem clicking it in that time frame. This is why those fake traffic sessions are so short – bots can click an ad and leave in under a second!

This means that at any time your blog might be serving up ads that also act as bot traps. Not only that, but ad verifiers are keeping an eye on your blog too. They might be visiting your site to check whether you are not doing anything suspicious.

One of the most efficient checks ad security companies do is visiting sites at random. It lets them check whether a blog is actually a blog and not an illicit site, and whether it abides to the ad network’s terms of service.

Since fraudsters could easily block known ad verification companies from visiting their fraudulent sites, the verifiers need to use residential proxies for this method. These proxies change their IP address into one that looks like an average user’s IP address, and lets them forego any blocks the fraudsters might put up.

Most ad verifiers will use a combination of the above techniques together to amplify their effects. Between the three of them, they are more likely to detect instances of ad fraud.

Anyone in the blogging business, regardless of their individual niche or the size of their readership, needs to take ad fraud seriously. Online advertising fraud can cause all kinds of problems for both advertisers and publishers.

Ad fraud has become part and parcel of advertising online, but it is one that is possible to combat. While the battle for ad space rages on, make sure to keep an eye out for any ad fraud occurring through your website.

This post was written by James Keenan, the automation and anonymity evangelist at Smartproxy. He believes in data freedom and everyone’s right to become a self-starter. He am always sharing knowledge and helping others succeed with residential proxies.