Aren’t you bored with all the similar, ho-hum ads that you see on blogs? Do you plan to advertise you site through the purchase of some ad space on a blog? A boring, run of the mill ad just ends up being a bad investment, and considering that blog readers are increasingly ad blind, it’s important to put a good deal of thought into the design of your ad so that you maximize the money you’re spending to buy ad space. Here are some general principles to consider as you design your next ad:

1. Don’t just put the name of your site with maybe a nice little picture. Instead, give the reader a reason to click or a “call to action”. What valuable, not-to-be-missed product or service are they going to learn about on the other side of the ad? Just the name of your site is probably not compelling enough.

2. Don’t use the same colors everyone else is using, or even the same shape. Instead, check out the site(s) you’re considering placing ads on. What colors do the other ads use? Choose a main color that will pop out from the group of ads. Are all the other ads squares? Try rounding the corners, or even going with a more unusual shape.

3. Don’t overload the ad with text. Instead, keep it simple. Clear, concise messages are the best. You do not have much time to grab a reader’s attention as they glance over the ads on a page. Lots of text generally becomes too small to read at a glance, especially on a 125px ad.

4. Don’t bore the reader. Instead, make them curious, surprise them, amuse them, and do anything you can not to be just another average ad. The ad that Text Link Ads has been using that says “Easier than getting Arrington to link to your site” increased their click-thru rate by 1000%, despite the less than attractive picture they used.

5. Don’t put to many steps in the animation or make your ads too “blinky”. Instead, again, keep it simple. You have a reader’s eyes for a fraction of a second, so remember that if you must have animation in your ad. Two steps would be the max I would recommend. If you follow #4 and make them curious with a question, answer it in the next frame. I don’t even allow animated ads on my site, because blinking ads are hard to look at and are distracting as someone is trying to read my content. If a reader is annoyed by your blinking ad, there is little chance they are going to click on it.

What do you think?  Are you ad blind?  What kinds of ads actually get your attention? 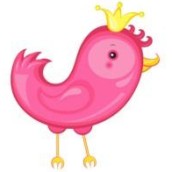 Randa is a blogger and designer specializing in WordPress and logo design. Besides contributing to The Blog Herald, she also manages WordPressThemes.com. Read more about design, marketing, blogging, branding and all things creative at RandaClay.com.