I don’t watch talk television. I don’t listen to talk radio. I don’t go to blogs that sit heavily on one side of a cause. I like my intellectual arguments, respectful, thorough, and balanced. But more and more what I see everywhere I look are two sides trying to be so opposite that they’re almost becoming the same. It’s worse than boring. It’s stifling, and at the same time amazing.

I’ve picked up negative comments removed the names and played them back to people I know have a stand. Folks on both sides of an issue have claimed the comments describe their opponent perfectly. Each side is saying the same things over and over. It’s proof that something wrong is going on. Don’t they know?

Is the glass half full or half empty? I’m right. You are worse than wrong. Are you for or against net neutrality? They are demons. We’re all saints. Let’s not talk about religion or politics. Trust us only. They always lie. Don’t mention the environment, gun control, or animal issues please. I don’t need to hear what you have to say. You don’t have anything to say that I need to hear.

No one is listening. They’re talking on top of each other.

Which side are you on? Don’t you care about the world, your kids, or social responsibility? Pick a side, hurry up, hurry up, please. I need to know your pick so that I can keep moving. There are only three kinds of people in the world – friends, enemies, and folks I don’t know.
Are you listening? Can you hear me? I see more than two sides.

Regardless of the issue, any time two sides become too firmly entrenched in their views and opinions, screaming that they are right and all dissenters are wrong, any potential action on this becomes paralyzed. And unless things change, the debate is already pointless because nobody is listening anyway.

I want to read the book before I have an opinion of the ideas inside. I like to have information and then have a point of view. I can’t let the media decide from the two sides a producer could find or those an editor thinks will sell. Every voice brings a new note, a nuance of clarity. Ideas and people don’t belong in a box.

Despite talk show TV and radio, it’s rare that an issue that has only two sides. The challenges of life are far more complex than that. They require deeper thinking and more interesting solutions.

Why are we binary on the most important questions, but one track with our minds?

If we could toggle the switch in our minds to “open,” we might think creativity instead of arguing the same points on top of each other. We might allow new answers to find their way in. We finally might see that the half-full, half-empty glass is merely twice as big as what we need.

Of course, someone would have to listen. 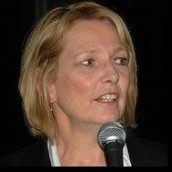