Tumblr, recently bought by Yahoo, is one of the most popular micro-blogging platforms. The NBA has one, celebrities have them, and most importantly, your target audience more than likely has them. But would your blog and business specifically benefit from a Tumblr?

Along the same lines, if you’ve already shared some photos/video via your other social media profiles, or you want to share something without writing an entire blog post about it, Tumblr is a great place to share. Because Tumblr mainly focuses on sharing short pieces of content and media (hence why it is called a microblogging platform), it is perfect for the times where you want to share something without spending a lot of time building content around it.

Is your target market young and/or technology savvy?

At the time Tumblr was acquired by Yahoo, it was reported as having over 300 million monthly unique visitors and an active estimated user base of 30-50 million, according to AllThingsD.

If your target audience is between the ages of 18-35 or they are in a technology-savvy industry or market, chances are they are using Tumblr. If you aren’t sure that there is a market for your content, try searching a few keywords related to your market and industry and try to find Tumblrs that are related to what you are posting online. However, be sure to use terms your audience would use, not necessarily what professionals would use. For instance, when searching for #socialmedia, this video on adding Hootsuite tabs came up in the search results: Are you active on other social media platforms?

If you aren’t already active on Facebook, Twitter, LinkedIn, or even Pinterest, you should probably work on building those platforms before starting with Tumblr. Besides giving you information to pull from, these popular social media networks may give you more initial visibility for your blog than Tumblr can.

To get started with Tumblr, create an account and decide on a custom theme– several of which can be downloaded for free online. Connect all your available social networks and begin scheduling out your publishing and content calendar. As soon as you decide what to use, you can start begin building your Tumblr presence. 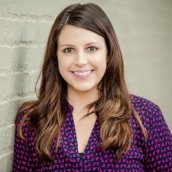 Kelsey Jones runs her own social media and search marketing business, MoxieDot where she helps clients grow their online presence. She was voted one of the top 100 marketers of the year by Invesp in 2009 and has worked for Yelp, Run.com, and Bounty Towels. Check her out at MoxieDot and on Twitter @wonderwall7.