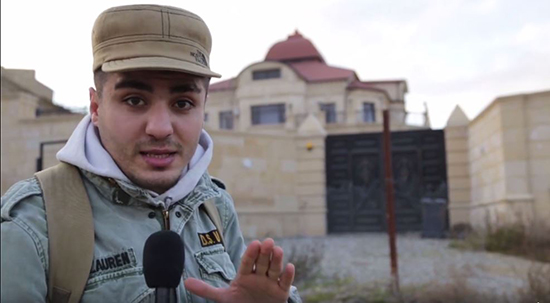 Organizations, such as the Committee to Protect Journalists have called for immediate release after Huseynov was sentenced to two years in prison for defamation. The blogger’s lawyers report that their client alleges that he was beat by police on the night of January 9.

The CPJ reports that on that night Huseynov was dragged by a group of plainclothes police officers, put into a unmarked vehicle and taken to jail. The next day he was fined for resisting police and released. However, images of the blogger leaving the police station bruised and battered with blood on his shirt should stand as evidence something was amiss.

The trouble continued for the blogger when he explained to the court that he was beated, tased and blindfolded. The judge called for an internal investigation, but the prosecutors refused to accept his complaint. Instead, they called the accusations defamatory. According to a press release from the Interior Ministry, they believed his allegations were “groundless” and “cast a negative light on the police.”

Huseynov’s lawyer explains that his client is serving his sentence, but does plan to appeal.

“Defamation should never be a criminal matter, but jailing Mehman Huseynov for saying police brutally abused him is a particularly obscene and cruel travesty of justice,” said CPJ Europe and Central Asia Program Coordinator Nina Ognianova. “We call for Huseynov’s immediate release and for an end to the grotesque prosecution of the blogger and press freedom advocate.”

The freedom blogger is no stranger to the corruption and police brutality of his country. In fact, he commonly reported on these issues on his popular social media channels.

Azerbaijani President’s Aide for Public and Political Affairs Ali Hasanov spoke out to the media. He explained that the country believes that Huseynov is facing concrete charges.

“I think there are attempts being made by domestic and foreign groups, as well as organizations under their influence, to politicize this issue. I’d like to mention that the legitimate state of Azerbaijan ensures the independence of courts. So it’s impossible to influence their verdicts by way of political campaigns and political pressure.”