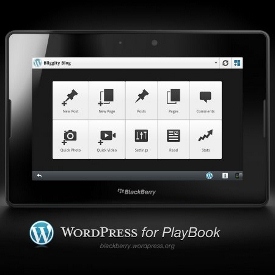 Research in Motion on Wednesday not only released the BlackBerry Playbook 2.0 OS, they also revealed the new WordPress App for Playbook, a free option that can now be downloaded directly from the BlackBerry AppWorld.

Much like versions available for iPhone, Android and WP7 devices the new version of the Blackberry App allows users to write posts, edit pages they have created and even manage WordPress comments from the systems administration area.

Thanks to the larger screen users also gain access to quick photo and movie uploading, geo-tagging of posts, page creation and other popular features found on the WordPress.com and WordPress self-hosted setups.

The program is pretty much what we’ve come to expect from Blackberry WordPress apps but with a far better 1024 x 600 pixels of resolution display.

WordPress for Blackberry Playbook has currently received 3.5 stars from 15 reviewers in the Blackberry AppWorld.