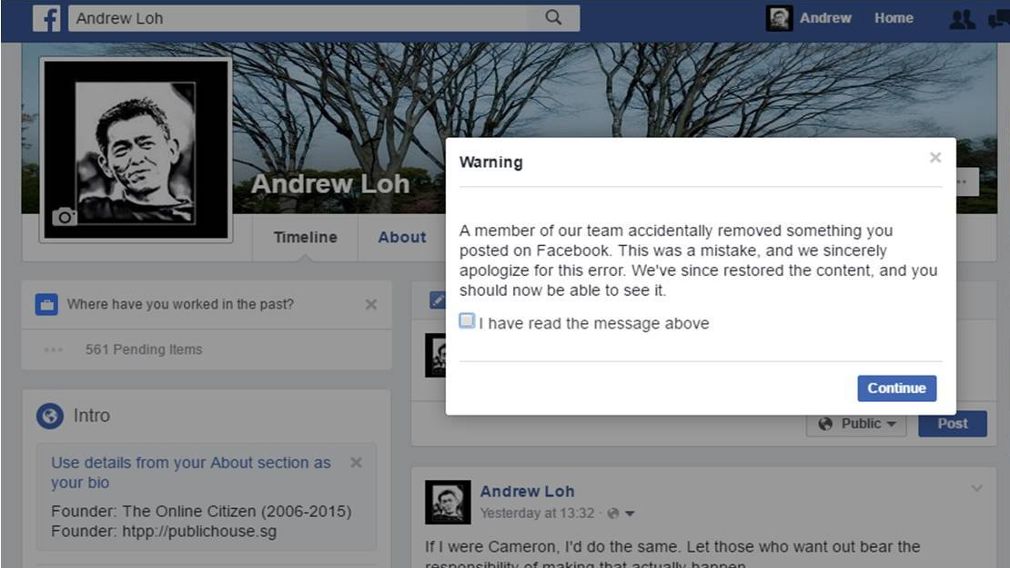 Facebook apologizes to a Singapore blogger after he claimed that some of his material were deleted for no apparent reason. The social media giant apologized  for removing the post and said that the deleted content did not violate any of the site’s content guidelines.

Andrew Loh is a popular blogger who writes extensively on the socio-political matters of Singapore and other Asian countries. He has been the topic of much criticism, especially when Internet and speech freedoms are being strictly restrained in these areas. On June 23, Loh posted a complaint that one of his earlier posts had been deleted by Facebook. The post was about violations of the recent Cooling-Off Day’s rules.

“In all my years on Facebook, I don’t recall any of my posts ever being removed by Facebook,” Mr Loh had said. “So it is strange that Facebook now informs me it has removed my post about Jason Chua and the Straits Times publishing the results of its illegal by-election poll on Punggol East.”

According to Channel News Asia, Jason Chua founded the “Fabrications about the PAP” Facebook page. He is currently being investigated because of possible breaches of Singapore Elections Department’s rules.

Quickly after Loh posted his complaint, Facebook responded with an apology and restored the content. He uploaded a screenshot of the pop-up screen apology he received.

“A member of our team accidentally removed something you posted on Facebook. This was a mistake and we sincerely apologise for the error.”