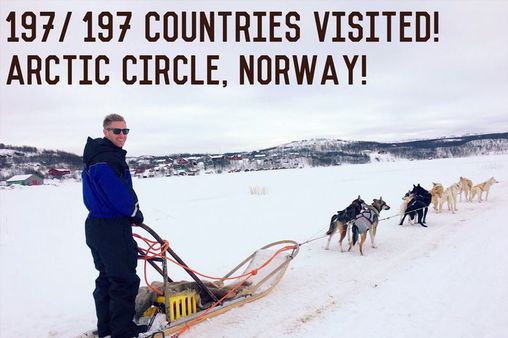 Johnny Ward caught the travel bug at an early age and quickly learned how to turn it into a career.

The Irish travel blogger celebrated St. Patrick’s Day in a big way by meeting a huge personal goal: visiting every country in the world. Ward is the first Irishman to visit all 197 countries. He celebrated finishing his quest by taking in the Northern Lights in Oslo, Norway.

The epic mission took him a total of about ten years to complete. Ward didn’t just visit the countries, he took advantage of each and every experience. For example, he swam with sharks in South Africa, skydived over the Great Barrier Reef and volunteered to help Burmese refugees.

Despite a joyful celebration in Norway, Ward explained that the entire process wasn’t exactly easy and he encountered several obstacles along the way. He ended up in the hospital around twenty times, including a broken leg in Thailand and ankle in Korea.

He shared that the hardest country to gain entrance to was Yemen, due to the civil war and violent uprisings. After countless tries, he was finally able to enter after randomly encountering the grandson of the King of Socotra. This coincidental meeting led to the grandson bribing Yemeni officials.

All of Ward’s experiences are chronicled on his blog, One Step 4Ward, which has help him fund his travels. In a recent media interview, he had a word of advice for those that wanted to embark on their own adventure.

“If you want to travel or want to work nine to five, that’s fine. But just focus on your goal,” Ward explained to the Independent. “I hate to see people drifting through life. We’re presented with so many opportunities and it’s our duty to grab them.”