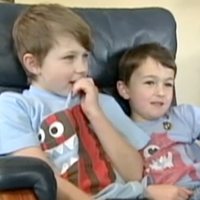 In 2007 father Howard Davies-Carr put up a YouTube video titled “Charlie Bit My Finger” which as the name suggests featured a baby boy named Charlie who bit his brothers finger.

Since going viral just over 4 years ago the video has been viewed 436 million times, earning the family heaps of money under Google’s revenue sharing program.

According to Mr. Davies-Carr he almost removed the video at one boy but then realized:

“At first I thought, well, this is a bit strange, maybe I should take it down.  And then I realized that, well, if I take it down then what would happen is that everybody that’s already created parodies or taken a copy of it and put it on their own website will just keep those running.”

The family started receiving revenue after the video reached 50 million views and when added in with TV spots the family soon found itself half a million dollars richer with more money coming in as people continue to revisit an internet favorite clip.

Charlie admits that he no longer bites his brothers finger because he won’t let him.

To think this entire success story all started because the boys’ father wanted to share the cute clip with their godfather who lives in Colorado.

Are you impressed with the type of money making prowess Google’s YouTube service can bring to people who are talented or just plain lucky?

Here’s the Charlie Bit My Finger video in case you’ve somehow managed to miss it over the years: