The trend has been to say someone was “caught in 4K”, but what that means is that the video was full of clarity and quality. Having a 4K camera means that there are literally 4,000 pixels capturing the picture or video. It is incredibly detailed in comparison to the now-dated 1080p resolution. We will go through a few Sony video cameras with 4K pixelation, which is great for vlogging.

Using a camera for vlogging will take your quality to the next level and give you more separation for your business. While modern smartphone cameras have fantastic quality, they still have several limitations that a dedicated camera, especially with 4K pixelation, can go beyond.

The most affordable option for vloggers is the beginner-friendly SV-1. This compact camera features a flip screen and microphone jack. At just under $500, this beginner camera is great to get started and learn what you do and don’t love in a camera before you upgrade with growth in your vlog. Having a clear complexion while vlogging is very important to influencers. This Sony camera has a soft skin effect mode. This allows for light to catch your skin in a sleek way, capturing natural and healthy-looking skin without sacrificing your saturation or the possibility of discoloration with other filters. Some of its best features are its real-time autofocus, image stabilization, and it’s switch between background bokeh modes.

This alpha camera is considered the best vlogging camera overall due to the image and video quality as well as the price. It has a continuous shooting feature at 11 frames per second. There is also contrast detection and real-time tracking. This Sony camera has proven to be great for vlogging on vacations and trips where there isn’t a great deal of luggage allowed or space available for it. This compact shooter is a great tool to have in your pocket for both pictures and video.

The flip screen of the Cyber-Shot DSC-RX10 IV is the biggest selling point. It makes it easier to film on the move without having to worry if you are in the shot or not. It does come at a bit of a steep price at just under $1,700, but you are getting great quality for that price. The camera has an ISO sensitivity of 12800, which gives a much better image quality in low-light situations. It also features a multi-angle LCD and a speedy shutter. This reduces distortion caused by rolling shutters in other models and brands. Bottom line, this Sony camera is not only one of the nicest on the market but the most intelligent as well.

The Alpha ZV-E10 features a mic input and flip screen. The large sensor offers both seamless image quality and minimum noise. The ISO sensitivity ranges from 100 to over 30,000. The LCD screen has a side opening, which has easy selfie-capturing capabilities. The mic input has 3 capsules in it, making sure that sounds are captured seamlessness, and without static. At $800, this is another Sony camera that is great for vlogging quality, as well as great for your wallet.

Now you have the rundown on all the best that Sony has to offer in terms of vlogging in 4K. You can make an informed decision when choosing your next, or first, vlogging camera. With options across the spectrum in price and design, there is no doubt that you will be able to find a Sony camera that exceeds your vlogging needs in terms of image quality and features. 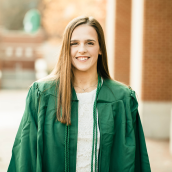 Adeline is a graduate of the University of North Carolina at Charlotte where she majored in Communications with a concentration in Public Relations and Journalism. Currently living in Charlotte, she enjoys reading, volleyball, and strolling through her favorite farmers markets with her Goldendoodle Theo.

This site uses Akismet to reduce spam. Learn how your comment data is processed.