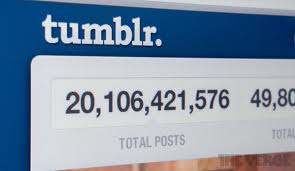 Leave it to the team at Tumblr to nearly forget to mention that they’ve reached 20 billion posts. The company used a rather casual tweet to its 237,000 followers to make mention of the mathematical big milestone.

“Forgot to make a big deal of this earlier.”

For a company that just got its start in 2007 they should be considering the feat a big deal, especially when considering that the company’s massive content is almost solely created by users who are not paid or even asked by the company to create content.  END_OF_DOCUMENT_TOKEN_TO_BE_REPLACED