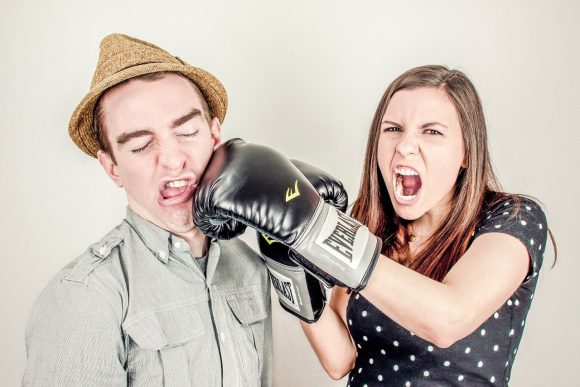 It seems like the online world is a breeding ground for controversy and arguments. In many ways, this is totally true. Every single day we see brands, influencers, institutions, and everyday people choose sides on a range of issues, give their two cents, and debate with strangers across the globe.

Is it because humans just love to argue?

In today’s media landscape, it comes down to one key factor: controversy sells.

Now, before we go any further, it’s insanely important to keep in mind that the phrase “controversy sells” isn’t an open invite to cause trouble across the web. Approaching controversy in blogging needs to be very, very calculated.

If done correctly, it can do wonders to boost your visibility. If handled incorrectly, you’ll boost visibility for the wrong reasons – which can kill your reputation in an instant. Given the current social climate and age of political correctness, it only takes one poorly-crafted string of sentences to bring down an empire.

Approaching controversy is like walking a tightrope. Let’s talk about how you do and reach the other side unscathed.

Controversial topics are everywhere we look these days. If one pops up that’s relevant to your niche, it might be a tempting bit of inspiration to create content around.

Before you dive in head first and start pouring your heart out into your blog section, you need to examine the topic under a microscope and see how it might impact your readership.

Always remember, the name of the game in approaching controversy is to pump up your followers – not alienate them.

A well-calculated piece of controversial content will do two things.

Think back to last year with Nike’s anniversary ad with Colin Kaepernick.

For those who don’t know, Colin Kaepernick, an NFL quarterback for the San Francisco 49ers, infamously kneeled during the 2016 season as the national anthem was sung before each game. His reasoning was to protest police brutality and racial injustice across the United States.

As you probably remember seeing on the news, this kicked up all kinds of controversy. People were saying he was disrespecting the flag, veterans, and the country as a whole. Others, who sided with him, fully supported his move.

Kaepernick’s contract with the 49ers ran out at the end of the season, and he has not played in the NFL since.

By creating this ad, Nike was very clearly taking Kaepernick’s side in the controversy.

The release of this ad was polarizing – to put it lightly.

All over the country, people were burning Nike apparel and proclaiming they would never buy a Nike product again. However, those in favor of protesting police brutality and racial injustice flocked to Nike’s side.

For them, buying from Nike became about so much more then just sports apparel. Doing so and wearing the logo was a statement.

Nike’s stock skyrocketed after this ad was released. Within a month of releasing the ad, the brand’s stock rose by almost 10%!

So what does this mean for you?

Regardless of the controversial topic you plan on approaching, you need to have a strong understanding for the general consensus – as well as the potential ripple effect throughout your following. Use tools like Brandwatch or Brand 24 to get a feel for the type of sentiment surrounding the topic.

Are you truly speaking to your faithful base?

Or are you alienating them?

This is where you need to look at the topic (and your position) from ALL angles. Take your time here and play devil’s advocate. A single misstep here can bury your brand name – no pressure…

Are You Qualified to Chime in?

This is one of the most important pieces to the complex puzzle of approaching controversy.

I’m sure you can name a few people on your social media feeds who constantly chime into topics that they have no business chiming in on. Even though the ability to do that is a great thing, do some of those posts make you roll your eyes?

An interesting story that we’re going to see in 2020 is the return of the XFL. For those who don’t remember, the original XFL was an alternative football league powered by Vince McMahon, Chairman of the World Wrestling Federation back in 2001.

The league folded after a single season – and was ridiculed throughout the sports world. The main reason for this was because it was a controversial take on football by someone who made a name for themselves in professional wrestling.

As a wrestling promoter, the general consensus was that McMahon had no business chiming into the world of football. The XFL didn’t just alienate football fans; it alienated wrestling fans too.

As a blogger with a following, getting this type of reaction is something you need to do everything in your power to avoid. The best way to do this is to stick to your niche. If you run a sports blog, don’t publish a bold post about the government’s approach to foreign policy. If you run a food blog, don’t write an angry post about construction laws.

Don’t use your platform to vent about just any controversial topic. Your followers come to your blog to read your take on a certain genre of topics – deviating too far from it can permanently change the perception.

Does your identity as a blogger reinforce your claim?

If you make a bold claim about a controversial topic, you need to have the right grounds to do so.

For example, a big topic of debate around the National Football League was the rule change related to roughing the passer. The new rule, which took effect in the 2018 season, shook NFL fans across the country.

On one hand, many people liked that star players were now safer on the field – and it enhanced the quality of play as less starting quarterbacks were at risk of injury. On the other hand, many complained that it softened up the game – and those vicious hits are what makes the NFL so great.

A writer on The Ringer, a popular sports blog, gave his hot take on the subject perfectly.

While I may not agree with this writer’s take, The Ringer has the credibility to approach this particular topic. Additionally, the bold voice, imagery, and branding aspects of this blog perfectly embody the controversial topic at hand.

Now, if this was a blog on gardening or fine dining, the post would be completely out of the blue and forced.

In the scenario that you approach controversy, your take on it should flow through the style of your writing and branding of the blog – from the voice all the way to the unique domain name.

Always remember, most online users today can smell BS from a mile away. If your take on a controversial topic has the slightest whiff, your followers won’t forget it!

The reality of approaching controversy is that you are going to rub some people (maybe a lot) the wrong way. Before you publish your controversial post, you need to have a game plan on how to defend your position.

One of the best examples in recent memory was the controversial Gillette ad.

In addition to the acclaim Gillette received, the backlash was fierce.

The brand knew they were going to stir up a reaction with this ad, and they handled it impeccably.

Plain and simple, you can’t chime into a controversial topic blindly. If you plan on sticking to your guns, there should be a good plan in place to respond to the ‘haters’.

To echo what was said in the first section of this post, play devil’s advocate. Come up with some potential responses for how your post might be viewed.

Do you have a friend who simply loves to argue about anything?

Have them read the post and give you their thoughts to inspire some responses!

In the world of controversial blogging, publishing a divisive post is like jumping into the furnace. If you aren’t prepared to take the heat, it may be best to avoid the topic.

Controversial posts can attract all sorts of people to your blog – some in a positive way, some in a negative way.

The old saying “look before you leap” has never been truer in this regard.

In truth, there will always be risk tied to approaching controversy – something even the biggest and brightest brands have learned the hard way. You simply cannot get into the minds of EVERYONE.

The most important thing is to not go into it blindly. As long as you understand your true following and their values, have legitimate grounds to add insight, and are prepared for the response, you stand a good chance of coming out on top!