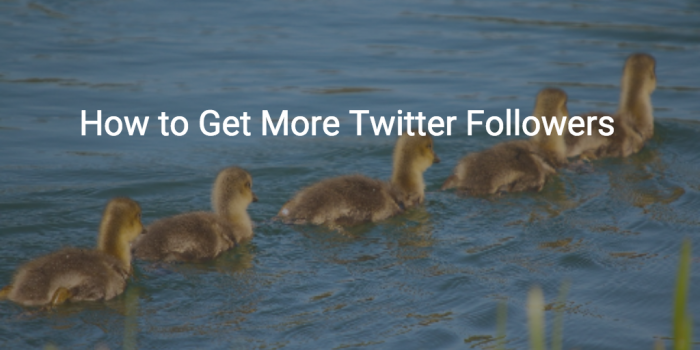 I know what you’re thinking.

This topic has been beaten to death. Why are we still talking about it?

Reality check: How many Twitter followers does your blog/brand have?

It’s safe to say that the core concepts of gaining and retaining Twitter followers haven’t changed drastically, but there are some adjustments we need to make – not to mention going back to the basics and reminding ourselves. It’s easy to become complacent and not make a genuine effort anymore.

Here are a few things you can do. What is the first thing you look at when deciding whether to follow a person or not? Assuming that that person is not a big name already, you probably look at the bio. If that applies to you, why wouldn’t other people think the same way?

When writing your bio, don’t just throw words onto the wall and hope that the right combination will stick. Think about yourself, your brand, and the message you want to send. Distill that into something bite-sized. Edit. Review. Edit again until you yourself get hooked.

Don’t follow others just because they followed you first. You may think it’s common courtesy, but it doesn’t work that way. Twitter is a constant stream of information, and you want to curate your feed. Otherwise, it’s just a waste of your time. We all know that person on social media. He shares all his posts, but rarely – if ever – shares relevant content from other sites.

Then there’s that other person who is a train wreck. You know he is in the middle of a nasty divorce and starts flame wars with the other party. He bashes everything and anything. You know practically everything about his personal life.

While there’s nothing wrong with sharing your posts or tweeting something unrelated to your blog (personal touch is good, after all), do be careful what you share.

Tweet what your followers (or followers to be) will find useful, interesting, or funny. Tweet about your personal life if you want. Tell a story. Humanize yourself. But for Pete’s sake, don’t be a train wreck.

Another reason: it’s not always easy to write the perfect headline.

Now, while you know that writing a killer headline for your post is good practice, have you ever thought about how that applies to Twitter? Sure, your title shows in your tweet, and that has a huge impact as well. But you can catch more attention adding a caption that makes the tweet stand out more. Do this regularly, especially when you re-share a post another time, and you’ll find that more people will click on your links, which in turn can convert them into followers. If you’ve forgotten this important element, it’s time that you remember it. When someone RTs your tweet, say thank you. When someone replies to a tweet of yours, reply publicly. When you see a tweet that you find interesting, tweet with a relevant response to it.

You’ll see how far this can get you.

However, there other ways you can encourage people to follow you. Here are a few.

Some think it’s passé, but do you see how many people still do #FollowFriday? Handpick people that you follow – include influencers as well – and mention them on #FollowFriday. When people mention you in their tweet, remember to show your appreciation; and if you find an account that looks interesting, follow it.

Twitter Mishaps: The Infamous, The Insensitive, and the Unfunny