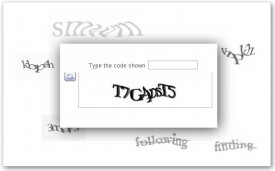 Facebook has added a Captcha check that requires users to enter hard-to-read text into a box after it is presented as a graphic.

Designed to filter out spam from bots and other tricksters. The program focuses on online sites and doesn’t appear at this time to affect other users such as Official Google Mobile Blog users.

It also appears that the Captcha does not affect more popular Google Blogger websites.

In the meantime LiveJournal, WordPress, TypePad and Squarespace blogging platforms remain free of the annoying captcha feature now used for the Blogger platform.

Users affected will be those people taking advantage of the blogspot.com domain.

In the meantime the war between Google and Facebook continues to heat up with both firms attempting to find new and useful ways for users to interact with their own products while shunning the other company’s technology offerings.

Do you think Google and Facebook are hurting each others sectors by attempting to close one another out of their respective tech sectors?