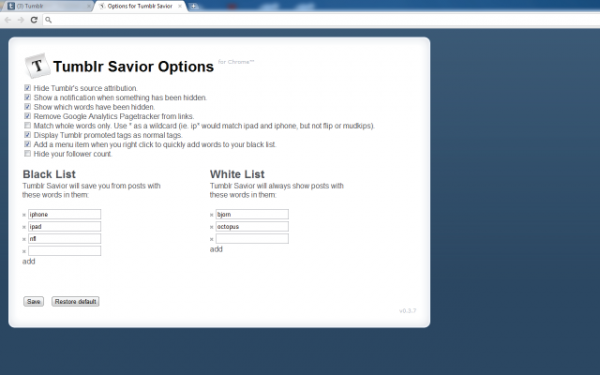 In a blog post last week Jeremy Cutler, developer of the popular Tumblr add-on Missing e wrote that browser extensions for the popular blogging platform might be in danger because of the company’s TOS.

In his post titled “Your Freedom To Use Your Browser Is Under Attack” he stated that the new TOS could allow Tumblr to delete accounts when browser extensions are use.

However after more than 13,500 notes Tumblr has clarified that it does plan to crack down on browser extensions which include the likes of Xkit, Tumblr Savior and Missing e among others. Users appreciate extensions because of added features such as Mass Editors, Magnifiers and other add-ons to the Tumblr interface.

As one user wrote:

“I definitely use one of these add-ons to make my tumblr dashboard a simple black instead of that hideous blue. and i use my own ‘reblog’ bookmark add-on because the one tumblr provides doesn’t always work.”

While at one point Tumblr threatened to delete Cutler’s blog but now its approach is more cordial with users, releasing the following message:

We obviously don’t want to take any punitive action on your account unless you’re doing something really bad. Anyone saying that “your blog is going to be deleted for X” or “reblog this or your account will be suspended” is almost certainly a troll. Suspensions usually happen because of things like spam and impersonation, as discussed more in our new Community Guidelines. We try to apply all of these policies with a tremendous amount of care and fairness.

The bigger consideration is that, as long as a developer is hacking Tumblr rather than using our developer tools, there’s no guarantee that those hacks will keep working properly.While we’ve always been within our rights to deny access to anyone making unsupported modifications to Tumblr, we do our best to err on the side of openness. The more enthusiastic developers and happy users, the better.

In the meantime Tumblr is welcoming user comments regarding its new terms of service.