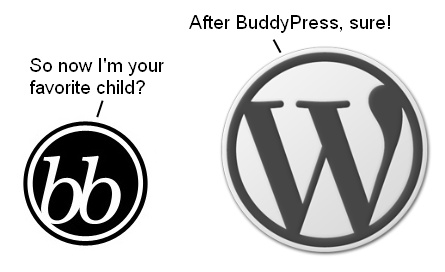 After announcing plans earlier to breathe some life into bbPress, the core WordPress.org team has announced that they are ceasing development of the blog platform in order to redouble their efforts on WP’s red headed step child.

For the first time in over 8 years, the core development team is not working on the next version of WordPress, but rather on an initiative that’s been dubbed “3.org.”

3.org is a very appropriately named project that is focused on building and polishing the surrounding elements of WordPress rather than on WordPress itself. Part of this initiative is the conversion of bbPress from a standalone platform into a neat little WordPress plugin. I’ve volunteered to lead that initiative, and wanted to take a moment to explain what that means for BuddyPress, bbPress, and what you can expect for the next few months. (Official BuddyPress Blog) END_OF_DOCUMENT_TOKEN_TO_BE_REPLACED

Unlike a few other WordPress services, bbPress is more or less the runt of the WordPress clan.

Compared to other Automattic services (like VaultPress, BuddyPress, VideoPress, etc.), which are only a plugin away, bbPress is more or less a nightmare for DIY bloggers who are not fluent in the art of geek (aka hosting language).

Coding headaches aside, it looks as if Autmattic is once again revisiting bbPress in order to make it easier to use for the masses.

I think WordPress integration is the most important item on the roadmap for the future of bbPress.

One, it’s an embarrassing pain in the butt to do now. One of the most frequent questions here on our forums. You have to jump through endless loops, and end up with something worse than most of the WP plugins for forums.

Two, we get the benefit of all the WordPress plugins and themes, which vastly outnumber our current options. Want private messaging? Use the BuddyPress plugin for it. Want OpenID? Stats? Sitemaps? There’s a plugin for that. Social network and profile features, in particular, are useful to the future of discussion forums and it’d be silly of us to duplicate that effort. (Official bbPress Blog) END_OF_DOCUMENT_TOKEN_TO_BE_REPLACED

What separates a blog and a forum? It’s not as simple of an answer as it was just a few years ago.

Forums have long been making use of RSS feeds and some have even adopted more blog-like layouts. Now many forum applications have begun sending pingbacks and trackbacks to articles linked in posts, an activity that began and, previously was limited to, blogs.

However, blogs have also begun to become more and more forum-like. Though comments have always been a major part of blogging, many are also encouraging original submissions. They are also placing a heavier emphasis on comments and services such as Disqus and Intense Debate provide greater commenter identity and cross-site accounts.

In short, where forums have been pulling from the playbook of blogs in their newest features, blogs have been gradually becoming more community-oriented, turning away from the author-oriented approach they are often associated with.

This has had the effect of blurring the lines between the two and confusing many who are building new sites.

To help make sense of it, I decided to turn to my long-time friend, podcast co-host and all-around community expert Patrick O’Keefe in hopes he could provide some insights into their similarities and differences as well as help sites decide which format is right for them. END_OF_DOCUMENT_TOKEN_TO_BE_REPLACED

That didn’t take long. The forum software bbPress, which is related to WordPress, recently went out in its first sharp release, being 1.0 of course. Now the first bug fix release is out. The announcement blog post doesn’t outline what was fixed but there’s details in a forum post. Users of bbPress 1.0 is advised to update.

It’s here, the WordPress of forum software! I’m happy to report that bbPress 1.0 is out, featuring a user friendly interface and a lot of the things we’d expect from something this closely related to WordPress. This from the announcement post:

This release offers many usability improvements, based on making bbPress more approachable for adopters who are accustomed to WordPress. To that end bbPress 1.0 now has a similar administration interface to WordPress and uses similar descriptions and names where appropriate. bbPress also behaves more like WordPress when it comes to things like automatically generating your .htaccess file when setting up permalinks.

BbPress has been stable for quite some time, actually, but in desperate need of polishing for most users. The 1.0 release is said to bring that, along with great support for integration with WordPress 2.7 and 2.8. Naturally, you can download it from bbpress.org.