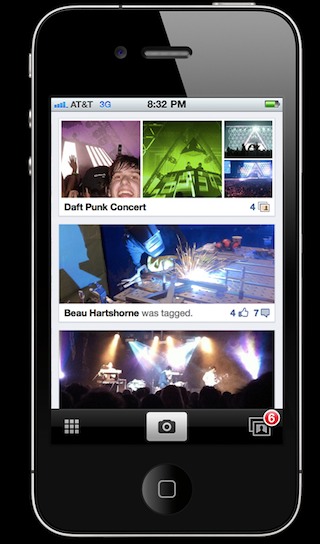 Apparently the social networking giant is becoming a little envious of Instagram, as new rumors are emerging that Facebook is releasing an iOS app to challenge the photo sharing novice.

According to TechCrunch, Facebook is secretly building an iOS app that borrows the best from Instagram, Color and Path (the latter which never really took off).

It’s still unclear whether Facebook will simply focus on photo sharing with filters (like Instagram), or integrate videos as well, although either way Facebook’s potential entrance into the market is probably sending shivers down everyone’s spine save Twitter.

Would you consider dumping your current photo sharing service for Facebook, or would you continue to use alternatives instead of the social networking king? Another day, another tweet acquisition. Although this time instead of buying out a third party tweet client, Twitter has assimulated an ad startup by the name of AdGrok.

When Twitter approached us and asked if we’d be interested in working on their monetization platform, we realized that this was a once-in-a-lifetime opportunity that we just couldn’t pass up. The fact that the Twitter team is both smart and user-focused only made our decision easier. (Official AdGrock Blog) END_OF_DOCUMENT_TOKEN_TO_BE_REPLACED Previously the only thing images Twitter hosted on their servers were user profiles pictures, although aside from that the company has dogmatically embraced a “text only” strategy. END_OF_DOCUMENT_TOKEN_TO_BE_REPLACED

After informing developers of the need to embrace OAuth and HTTPS (news a few developers didn’t enjoy), Facebook is now throwing developers a perk by allowing them to receive payments beyond Facebook Credits.

Starting today, developers signing up for Facebook Credits will have the option to use PayPal as a payout option. Adding PayPal offers more flexibility and choice for payouts and makes it even easier to monetize your app with Facebook Credits.

When signing up for Facebook Credits for the first time, you can now add an existing PayPal account in the onboarding flow. You can also sign up for a new PayPal account by securely repurposing all the information you entered for Credits Onboarding to create a PayPal account. (Facebook Developers Blog)

According to Facebook, over 250 developers upon 500 apps have embraced Facebook Credits, which although significant still seems small considering that the social giant boats thousands of apps.

By embracing PayPal, Facebook is able to attract more developers who might be weary of Facebook’s in house currency system, as well as expand in more countries where Facebook Credits is not an option.

For those of you who create apps upon Facebook, is the PayPal integration a blessing for your app? Also would you prefer another method besides PayPal and Facebook Credits?