Matt Mullenweg (the founder of WordPress and Automattic) was recently interviewed by the legendary Robert Scoble (who was taking questions from users on Twitter).

During the interview (which was produced by Silicon Prairie News) Matt shared his opinions regarding AdSense, WordPress security, hosting companies and even social buttons (the latter which he humorously referred to as “mullets”). END_OF_DOCUMENT_TOKEN_TO_BE_REPLACED

Matt Mullengweg (the founder of WordPress and Automattic) recently was able to answer some questions regarding the strength of WordPress at Le Web (one of the leading tech conference in Europe).

While some of the questions answered at Le Web were not surprising (i.e.  his desire for Automattic to avoid being acquired), a few answers regarding revenues for WP.com were.

Are you making money?

We’re focused on growth right now, so we’ve invested a lot in infrastructure and so on. We haven’t been focused on revenues so far, but I can tell you we’re break-even.

How big is the company right now?

We’re about 74 people. In terms of revenues to sustain our growth, I’d say we make a little under $1 million a month from all our services combined.

(TechCrunch: that’s roughly $10 million a year, based on that statement and what we’ve heard from other sources.) (via TechCrunch)

Note: Questions in bold were asked by Alexia Tsotsis

Matt Mullenweg later went on to explain that most of Automattic’s revenues come from selling premium features and hosting services which are apparently generating a nice sum of cash for the company every month.

While it’s good to hear that WordPress has a solid business plan (something Tumblr has yet to discover), what was surprising to this author is the fact that WP.com has not yet become a very lucrative enterprise already, despite boasting superior features when compared against rivals.

Although it’s inevitable that Automattic will eventually become a thriving company (especially after convincing Microsoft to surrender its blog users to WP.com), hopefully freemium and premium services like Akismet and VaultPress, respectively, can help quickly push WP.com deep into the black. 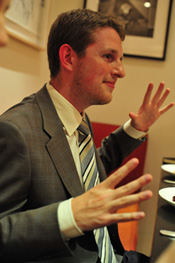 Every WordPress blogger who didn’t live under a rock recently has noticed that there have been many heated debates in the WordPress scene this year:

And with yesterday’s switch from Cutline to Coraline on WP.com the debate has been revived once more. END_OF_DOCUMENT_TOKEN_TO_BE_REPLACED The Automattic has announced the launch of wp.me shorturls for WordPress.com hosted blogs. According to Matt Mullenweg the wp.me shorturl is different from other services such as tiny.url or tr.im who had their 5 minutes of fame last week.

Other than the restriction of only being available to WP.com users, WP.me sounds like pretty much any other shorturl service to me. Most bloggers will not care about the rel="shortlink" code in the header nor will most users bother thinking long term if their links will still work in a year. But all credits to the Automattic team to cover most angles for their users and keep adding services to their platform, making WP.com better and better on an almost daily base.

Matt Mullenweg has, in an attempt to clear the confusion with themes and the GPL license they might or might not inherit from WordPress, contacted the Software Freedom Law Center, who was instrumental in creating the GPL version 3 license. The reply, which is presented as a whole in the wordpress.org blog, basically says that while CSS and images might not be “tainted” by the GPL license, the template files surely are since they load WordPress functions and rely on them to work. END_OF_DOCUMENT_TOKEN_TO_BE_REPLACED