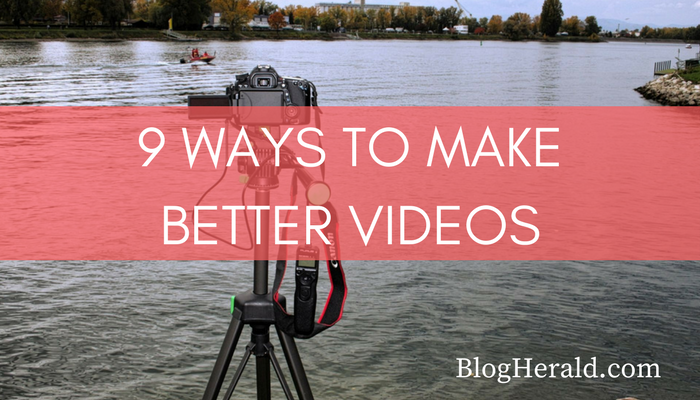 It’s 2018, and YouTube is overflowing with millions of viewers and creators. Many creators are using video blogs or vlogs as they’re commonly known as, as a popular medium of sharing content. If you want to begin your own vlog or improve any of your current videos you should follow these nine important tips.

“Storytelling is one of the oldest (and most effective) forms of communication,” James E. Hein wrote in his blog post.

Storytelling is known to have a positive impact on viewer retention. If viewers are more apt to retain the information in your videos, they are not only going to be more likely to watch your videos for longer, but also watch more of your videos that they haven’t seen.

Amongst the most popular sites that offer music that is free for commercial use would be from YouTube itself. In the YouTube Creator Studio you can download thousands of free to use songs from all sorts of genres that fit every mood. You could also use other sites such as http://dig.ccmixter.org/free or http://freemusicarchive.org/curator/video, which offer similar services to that on the Creator Studio. B-Roll is the alternative footage that you use alongside the main footage and it can consist of (but isn’t limited to) time-lapses, slow-motion footage and drone shots. Including B-Roll helps set up another scene or give more information on the timeline and location of where the video is taking place.

You can come up with some of your own B-Roll or you could use sites like www.videezy.com. Videezy is a site that offers free cinematic high-definition videos and B-roll footage. All of the content on the site is submitted by Videezy’s Community members.  However, only use B-roll footage where it makes sense and helps advance the narrative of the story. You may have a camera that is capable of filming in 1080p or even 4k but without proper lighting, your videos will be out of focus, fuzzy and blurry. One option for mobile lighting would be in the $80 LUME CUBE. This little cube can be used on just about any tripod mount and has a 1500 lumen led. With good lighting and a little bit of stabili, y you can make your videos crispy and smooth.

Make Sure You Have Clear Audio

Most people could get through with watching a lower quality video however; people can’t stand to listen to a video with poor audio. People will almost instantly click away from a video that sounds like it was filmed in a wind tunnel. This is why audio is so important and it can’t be fixed in post like some videos and photos can.  If you’re able, invest a little bit of money in purchasing an external microphone such as a shotgun mic; your viewers will thank you.

Make the Most of the Equipment You Already Have There’s no need to go out and spend hundreds or even thousands of dollars on video equipment such as gimbals, lights and sliders.  Use YouTube as a source of inspiration for cameras hacks like these. Like in the video you could use items found around your house such as a flashlight for an interesting light effect. Simple camera tricks can be achieved with other items such as a towel. You can use a towel as a slider for your camera for a cool video effect.

Be Yourself and Be Comfortable

This is an extremely important thing when you are trying to make videos for the first time.  You never want to make the videos to sound scripted and almost forced.  You simply want the videos to flow like a normal conversation. Talk to the camera like it’s one of your friends and you might even get some conversation back in the comment section.

Film More Than Video Than You Actually Need

Another tip to remember is to film more video content than you actually need.  This will give you a large amount of content to choose from and to edit down to create a well-put-together story.  Also, many times the videos you film will turn out better than you expect.  It’s also much better to have too much footage than not enough. You don’t want to have a choppy story.

Use Edits to Advance the Story

Using edits like merging two videos into one can help advance a story and provide smooth transitions to the rest of video. Using edits like snapping to change clothes or switching cameras are pleasing to watch. This also gives viewers a clear timeline of events without any unnecessary explaining or stoppage.  You could also combine multiple shots of one image together to get multiple angles of a situation for a cinematic effect.

While these tips may not get you up to YouTube’s new monetization requirements instantly but they might help you get on track.