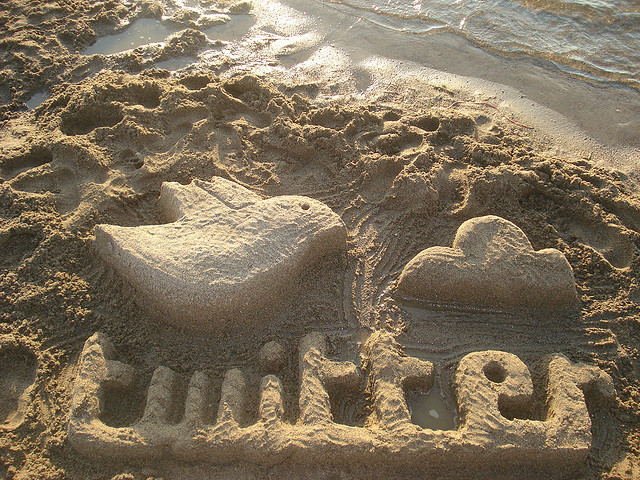 Editor’s note: This post was written by Tim Soulo, who calls himself an MMA marketer (which stands for “Mixed Marketing Arts”) and his focus is tactics and strategies that bring you either money or clients. Make sure to visit his personal blog at: BloggerJet.

How come Twitter is so simple and yet every social media expert on the planet tries to make it look so complicated? However, many bloggers seem to misunderstand how Twitter works and as they try to milk it for traffic they end up doing totally ineffective things: change their profile picture 3 times, order a custom twitter profile design, and rewrite their twitter bio twice a week. But all of that doesn’t help.

So today we’re focusing on five simple tactics that are responsible for how many traffic you get from Twitter.

The more people tweet about you, the more traffic you’re going to get. And that’s a fact.

Most people think that simply growing the number of their twitter followers is enough to get more traffic from twitter, but that’s actually not the case. Various studies have indicated that only about 1% of your followers will actually click the links that you paste into your tweets, so with that in mind, you need about 2,000 followers to get 20 visitors to your website.

But the only way that someone else is going to share your content for you is if you write something that’s worth sharing. Epic content is shared in a natural, organic way, and there’s simply no tip out there that’s more effective than writing something truly great.

Of course, writing epic content is one thing, but getting people to read it, and more importantly share it can be somewhat more challenging.

The first thing you have to do is come up with a snazzy headline that’s going to grab your audiences’ attention. Remember, a boring title isn’t going to tempt anyone to click your link, and some people will even retweet your article without reading it just because of how great your headline actually is!

After you’ve got their attention, give them something cool that they can share with their twitter followers in the form of a tweetable quote.

Services like ClickToTweet or TweetDis allow you to fill your articles with short quotes that your readers can share with a single click. The more eye-catching quotes you pepper throughout your blog posts, the more people are going to want to share the things you say.

Also, make sure it’s easy for people to tweet the article itself. Most people are lazy, so you have to place the tweet button right in front of their eyes if you want them to make a tweet. Lots of bloggers use plugins like Digg Digg to create those “floating” social buttons that are always at your sight.

3. Connect With The Right People HootSuite is a useful way of helping you to follow relevant topics and keywords that will start up new conversations with the people who you need to be talking to. Obviously, finding the right people for your twitter following is going to take some time, but it’s a great way to search for truly valuable contacts.

After you’ve found your audience, pay attention to them. One of the most beneficial things about social media marketing is that it is ‘social’.

Twitter allows you to access instant reactions to your tweets so that you can understand exactly how they feel about whatever it is you’re doing. This way, your audience can tell you what’s working for them and what isn’t.

Pay attention to which topics are more popular with your audience, and get rid of the topics that don’t generate a lot of interest. Make sure you only talk about relevant things in your tweets. Nobody who is following you to hear about your expertise in productivity wants to know if you’re having an argument with your next door neighbor, or you need to take the dog to the vet.

There’s nothing wrong with sending repetitive tweets again and again. After all, the messages that move through the twitter stream on a daily basis typically go so fast that most users are going to miss the comment that you post first thing on a morning when you’re enjoying your breakfast coffee.

It’s a good idea to check when your audience is going to be most active, and then send out tweets tailored to catch them in their down-time. Check Buffer if you need an app that will do it for you.

However, just because it’s okay to repeat, doesn’t mean that all of your posts should be all about you. If you spend all of your time constantly posting the same promotional information about your own content, some followers are bound to lose interest. Remember to mix it up from time to time, offering third-party sources and different bits of information.

And the last thing : an odd image in your tweets is a good way to chance the pace every so often.

As you can see, all of the tips listed above are amazingly simple and yet they are crucial for your success on Twitter. In fact many bloggers will tell you that their Twitter Marketing is actually nonexistent: they just write awesome content, ask everyone to share it and stay polite and talkative with their Twitter followers. No secret tactics, no game of numbers.

I don’t see a reason why you can’t get tons of traffic from Twitter, too. So good luck!