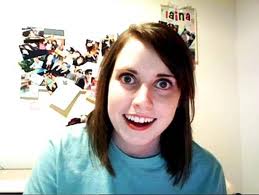 Overly Attached Girlfriend has taken time off from stalking Justin Bieber, Drake and other celebrities so she can focus on something more important, helping charities raise money through the use of her viral fame.

The first episode of?Dare To Share?was uploaded on Tuesday and according to Laina Morris:

?The Internet is a unifying force that brings the whole world together.? We?re more connected now than we have ever been, through things like Facebook, Twitter and YouTube.? In today?s world, we are constantly connected.? Smartphones that go everywhere we do are notifying us every second.? It?s good?we can laugh together at funny videos of sneezing pandas, English brothers who bite each other?s fingers, and Overly Attached Girlfriends.? And it?s bad because people can do or say whatever they want when they?re hiding behind their computer.? But together, we can work to make it the most powerful method in helping others.?

The new program works by allowing viewers to dare Morris to do crazy things. As money is raised Morris will complete the crazy tasks.? END_OF_DOCUMENT_TOKEN_TO_BE_REPLACED 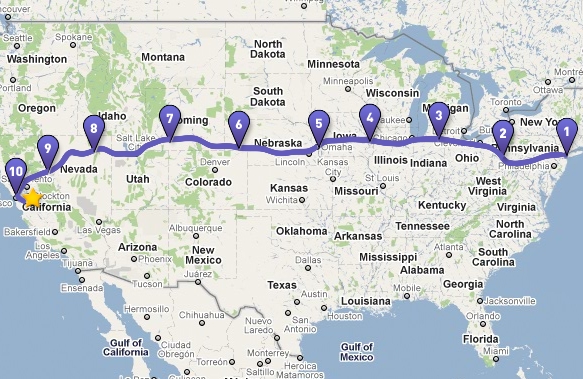 Ahead of the upcoming anniversary of the September 11th attacks, McCann Worldgroup has partnered with a motorcycle club called “Ride with the 40” to raise money for a national memorial at the Flight 93 crash site. According to AgencySpy, 3 producers from McCann have joined Ride with the 40 on a cross-country road trip to generate funds by utilizing social media throughout the journey.

The concept is to encourage people to donate to the cause via their web site and via text message, but also to create a community effort by inviting people to participate in social networking with Ride with the 40 and fellow followers. Ride with the 40 are utilizing Twitter, Facebook, and Foursquare to document their journey, which began in Newark, NJ last week and will end in San Francisco. END_OF_DOCUMENT_TOKEN_TO_BE_REPLACED 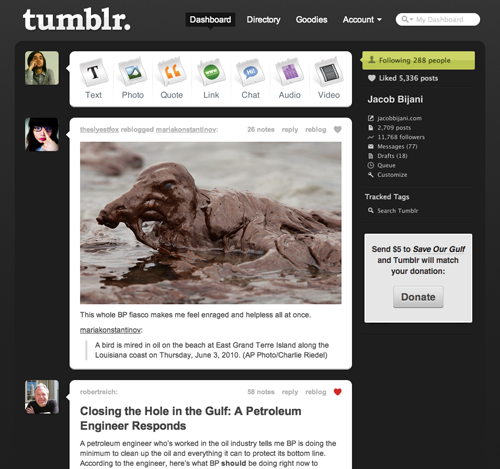 It looks like Tumblr has had its fill of the oil fiasco that has now turned the bluish green gulf of Mexico into a red and black dead zone that is threatening wildlife (as the image above shows).

In order to encourage users to help fund efforts to protect what’s left of the gulf ecosystem, Tumblr has changed everyone’s dashboard background to a “heart-of-BP-executive black” unless they choose to donate $5 to a specific charity. END_OF_DOCUMENT_TOKEN_TO_BE_REPLACED

Drew Carey, or @DrewFromTV on Twitter, wants more followers. He also wants to donate money to Lance Armstrong’s charity organization Livestrong. So why not do both at the same time? If Drew Carey gets 1 million followers by December 31st this year, he’ll donate $1 million to Livestrong. And if he gets less? Well, it’s a buck a follower, so it’ll be money for Livestrong no matter what. Right now @DrewFromTV is at 73,814 followers, but that’ll probably change. END_OF_DOCUMENT_TOKEN_TO_BE_REPLACED

DonorsChoose.org managed to raise $275,000 for public schools in last year’s Social Media Challenge. This year’s edition is sponsored by HP, and up and running already.

For the competition, each competing blogger and twitterer creates a unique “Giving Page” at DonorsChoose.org filled with his or her favorite classroom projects. A “leaderboard” at http://www.donorschoose.org/social-media-challenge-2009 displays the Giving Pages and tracks the live competition progress by total amount donated.

Naturally they want to do even better this year, and you can participate with your own blog as well.