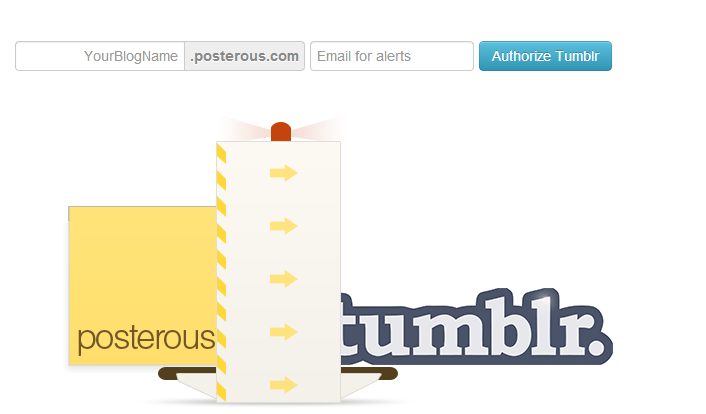 With Posterous officially shutting down on April 30 the team at 3Crumbs has launched JustMigrate.com. The platform makes it simple for Posterous account holders to move their posts over to a new or existing Tumblr page.

JustMigrate is a simple program, just type in your Posterous URL, authorize the URL with Tumblr and allow JustMigrate.com to work its magic.

Users with multiple Tumblr accounts will be asked ahead of time to choose the proper Tumblr location for the new migration.  END_OF_DOCUMENT_TOKEN_TO_BE_REPLACED 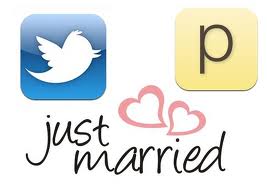 Twitter has just made a major leap forward in blogging by purchase Posterour, a blogging platform that came out of a 2008 Y Combinator sponsorship.

The platform operates just like WordPress and Tumblr by allowing users to create free blogging accounts which they can then use to post stuff on their “Spaces.”

Posterous has focused on “ease of use” which means an 8-year-old or an 80-year-old can literally figure out the system in no time at all.

On the Twitter blog the acquisition appears to be more of a talent buy:

“Posterous engineers, product managers and others will join our teams working on several key initiatives that will make Twitter even better.” END_OF_DOCUMENT_TOKEN_TO_BE_REPLACED

Known mostly for their email everything approach when it comes to blogging, Posterous has published some excellent advice for bloggers living in a hostile country.

With Twitter and Facebook now shut down in Egypt to quell government protests, email is the only reliable sharing platform left.

Same story in China.  If you’re living or traveling there, email posting via Posterous Sites or Groups is the only way to get videos and photos to your Posterous site and reposted to Twitter and Facebook. (Official Posterous Blog)

For bloggers traveling through (or even residing in) a hostile nation, establishing a Posterous account might be something to consider as you can use the platform to auto post upon numerous platforms (which is useful if your government decides to DDoS your blog).

For those of you who prefer other platforms like Blogger, WordPress.com, or Tumblr, you can configure your blog for email posting which will allow you to easily publish text as well as images (note: with the latter two you can also post videos as well).

Self hosting WordPress fans can install the Post Via Email plugin to achieve something similar, although if anyone knows any other plugins (that are up to date) feel free to let us know in the comment section below. 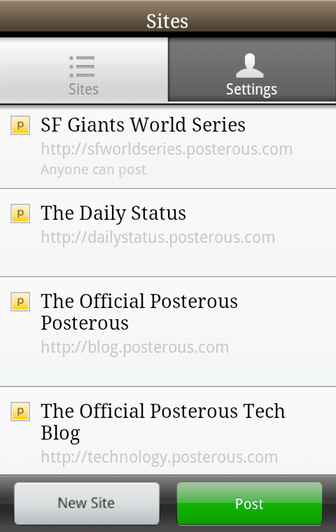 Posterous for Android makes posting and sharing your life as simple as a few taps. Now you can send in photos, a video or a couple of paragraphs directly from your Android device. […]

Android 1.0 is a big step for Posterous, but it’s only our first. We’ll continue to add to our supported device list over time.  Stay tuned for new releases that leverage the full power of the Android platform including Taskbar notifications and Android Live Folders.  We’ll also be adding additional file type support, an improved reading experience and full commenting. (Official Posterous Blog)

Believe it or not this is Posterous’s third mobile app, as the company has previously created two official iPhone apps (PicPosterous and Posterous, the latter which is similar to its Android brother).

The company is also planning on releasing a Blackberry app as well in order to compete against WordPress and Tumblr (who both have apps across all three major mobile OS’s).

While it’s great to see Posterous embracing Android, unfortunately the app only officially supports nine Android smartphones which means that a few of my friends and family will (in theory) be unable to use the device (although I’m sure they’ll figure away around the issue).

There is no word on whether the startup will consider embracing Nokia or Windows Phone 7 in the future, although Androids embrace does place the startup ahead of rivals like Typepad and Squarespace (the latter who is still working on their Android app).

After debuting their second iPhone app in October, the Posterous team is now preparing to invade the Android arena with a brand new mobile app.

In a post highlighting the inclusion of drafts as well as auto save in a brand new iOS update, the Posterous team not only mentioned their pending courtship of Android, but the need for a few brave volunteers.

And with this release, your posts are now automatically saved as you write them. When an unexpected crash happens, you can just pick up right where you left off.

Unlike iOS which boasts over half a dozen official apps, thus far Android has only been courted by WordPress, Tumblr and (in the semi-distant future) Squarespace.

Posterous’s entrance upon Android could help the company not only expose more users to its innovative platform, but also convince new users to make Posterous their default blogging client (as the service can auto post to a variety of social networks and blog platforms).

There is still no word on when the Android app will appear, although hopefully we will see one live upon Android Market before Christmas.