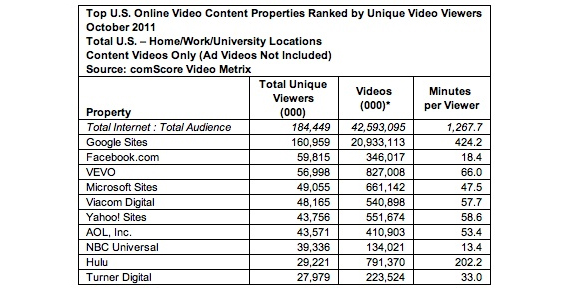 Despite the second most number of unique viewers for their videos section Facebook.com in October 2011 failed once again to turn their site visitors into longtime viewers of videos posted by Friends and advertisers.

The comScore Video Metrix shown above shows that while Facebook.com was able to surpass VEVO for the first time in terms of total unique viewers, they fell far short of the groups all important ‘Minutes per Viewer.’

In comparison VEVO managed a lower unique visitor number at 56.998 million viewers but scored huge with 827.008 million videos with an average per user viewing time of 66 minutes. END_OF_DOCUMENT_TOKEN_TO_BE_REPLACED

The tragic death of Michael Jackson is still hot on the web. The upcoming memorial service aside, another proof of the artist’s former greatness is him surpassing everyone on Facebook, clocking in at over 6.8 million fans as I’m writing this. And it just doesn’t stop, new fans are added every second. It’s almost scary.

Meanwhile CNN is planning to integrating people’s MJ memories from Facebook with their upcoming live coverage of the memorial. Assuming you’re one of the millions not holding a ticket to the Staples Center, Mashable tells you where you can watch the memorial online. There is no way anyone in the social web will miss this, wether they like it or not.

The guys from VideoEgg have recently unveiled Twig, a form of video advertising that combines pop up vids with a sticky toolbar that hovers like a “twig” above or below your browser’s frame.

Twig looks like the familiar hovering bar we see in several media sites like Digg and Facebook when we click on external links. Although we may have mixed emotions about the implementation of a pseudo intrusive app on our blogs, the model does address the query of advertisers who want a guarantee that their call to action is always visible.
END_OF_DOCUMENT_TOKEN_TO_BE_REPLACED

Flickr’s video hosting features puzzled me when they launched. 90 seconds, why would I limit myself to that really? But fine, if you shoot a few vids with your digital camera then that might cut it, most won’t support long clips anyway. Video used to be available for pro (as in paid) users only, but they’re opening it up to everyone now. Still 90 seconds limit, and 150 MB/video. Pro users can upload videos in HD (where 150 MB might be a tad small, as Webware points out), and so can regular users but it’ll play in SD only. Also, there’s an upload cap on regular users, just two videos/month.

No, I’m still not sold on Flickr Video. Sorry. I do appreciate the lifted set limit on free users, that really bugged me before I went pro.

Showtime, an US pay cable network that is also available in other parts of the world via satellite, utilizes the internet to launch a new TV series, called The United States of Tara. According to UPI.com, the first episode will be aired for free on sites like TV.com, Yahoo and Blockbuster.com, but also on blogs like Gawker, and social networking sites like Facebook. You’ll even be able to catch it in your mobile phone if you’ve got the necessary services from AT&T or Verizon. Read more about the series over at the Showtime site. The premiere is on January 18th.

My bet is that we’ll see more launches like this, especially using service like YouTube. It would be pretty easy to gain traction in the blogosphere if you played your cards right, so don’t be surprised when PR reps from TV companies start emailing you…